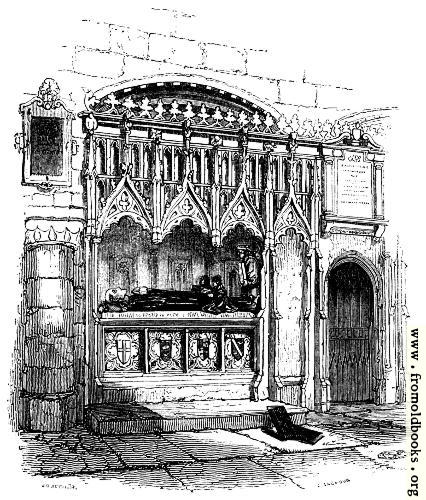 The tomb of Rahere is also in the choir, but it is of somewhat later date than the priory. Nothing so exquisitely beautiful in sculpture as that work with its recumbent effigy and attending monks and angels, its fretted canopies and niches and finials, had yet burst upon old England when Rahere died (Fig. 528). The very perfect state in which it now appears is owing to Prior Bolton, who restored it in the sixteenth century, as well as other parts of the structure; a labour of which he was evidently very proud, for wherever his handiwork may be traced, there too you need not look long for his handwriting —his signature as it were—a Bolt in tun (Fig. 530). This prior was an elegant and accomplished man; if even he were not much more. (p. 139)