2271.—Oxford from the Abingdon Road.details 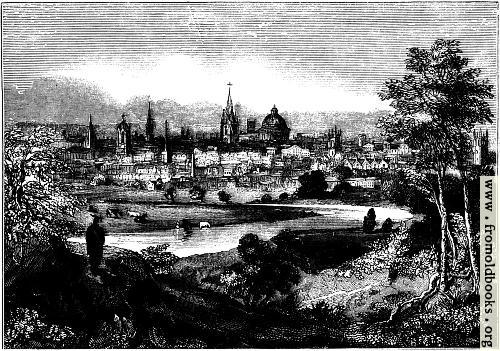 2271.—Oxford from the Abingdon Road., in Oxford,Oxfordshire,England more

If in one of those magic freaks of which eastern tales are so full, a person who had never seen Oxford or Cambridge, nor paid much attention to aught he might have read about them, were set down just outside on of these cities, say, for instance, Oxford, and on the Abingdon road (Fig. 2271), and were conducted from thence into its streets and among its population, he would be apt to think he had been transported to some foreign country; so unlike in various respects would seem the aspect of the place as compared with the aspect of other English towns. The ladies, it is true, dress there much as elsewhere; but the gentlemen—some in black togas and black square caps—others with their robes displaying rich red silk linings, and wearing lace and embroidery, and yet others who move resplendently about beneath quantities of gold lace and gold thread—what are these who wear the most picturesque of dresses with so picturesque and gallant an air?

Turning from these, who form so large a part of the entire population of the place, the place itself presents new cause for wonder and admiration. Never surely before were so many magnificent edifices congregated in so limited a space. Private buildings and public ones have here reversed their usual numeric proportion. Here, if anywhere, may one speak with propriety of a city of palaces. And then the gardens—those paradises of peaceful delight—which seem as though each must join at some corner or other the one nearest to it, and so the whole extend all over Oxford. Truly, it is a thing worth remembering, the first sight of the students and the streets of this famous University.” (p. 283)