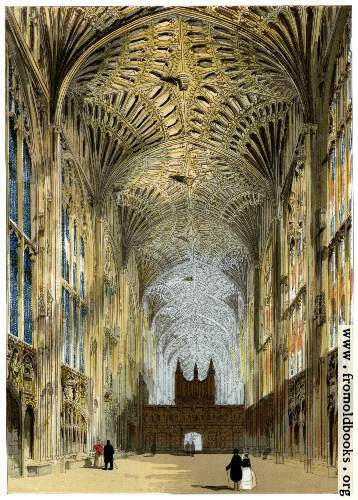 The Sixteenth-Century chapel at King’s College in Cambridge University is famous not only for its music but also for its fabulous architecture. This 1845 engraving shows not only the amazing vaulted stone ceiling but also how the chapel looked without chairs or tourists.

The Chapel of King’s College, Cambridge, is ono of the finest specimens in the kingdom of the later or perpendicular English architecture. The exterior is noble, but the interior presents a combination of magnificence and beauty almost without a parallel. The foundation-stone was laid in September, 1447, in the reign of Henry VI., but the building was not completed till July, 1515, in the reign of Henry VIII. The agreement for the painted windows was not made till 1526, and the screen and part of the stalls were not erected till 1534. The name of the architect was Cloos, or Close, whose son Nicholas Cloos became a Fellow of King’s College in 1443, and Bishop of Lichfield in 1452. The entire length of the Chapel inside is 291 feet, the breadth 45½ feet, and the hoight 78 feet. The roof is a vast canopy of stone wrought into tho most oxquisitely delicate tracery, the key-stones forming largo and beautiful pendents in the centre, from which the ribs of the arches, with their accompanying tracery, radiate in all directions. The chapel is lighted from tho sides by twenty-four Gothic windows, each of which is nearly fifty feet high, and is filled with the most brilliant painted glass, representing Scripture subjects, the designs of which are so excellent that they have been ascribed to Julio Romano, who was living at the time when they wero executed. The great east window is also filled with painted glass; the great west window alone is plain. The glass of the whole of these beautiful windows is now (1845) undergoing a complete cleaning and burnishing, each window being taken out in succession for the purpose. The altar-piece is a beautiful painting of the Taking down from the Cross, purchased as the production of Ricciarelli (Daniele di Volterra), but which has been ascribed to Raphael. A screen of curiously-carved Gothic tabernacle-work, surmounted by the organ and organ-loft, about the middle of the chapel, separates the ante-chapel from the choir. The carved stonework of the ante-chapel is exquisitely rich, but tho pannelling of the stalls and the tabernacle-work of the choir are not in equally good taste, and do not harmonize well with the style of the rest of the chapel. (p. v)