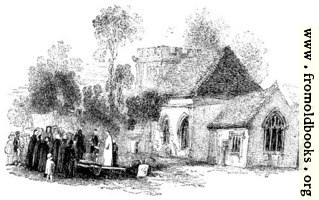 An English village church, with an unusually short tower. Probably the building shown here dates from the fourteenth and fifteenth cenuries; it was extensively restored in the 1890s, some fifty or more years after this engraving was published, and looks a little different today. Or maybe I have not found the right place. Outside the church, in the foreground, is a funeral. The vicar is reading the burial service, and a group of mourners stands around the freshly-dug grave, dressed in black. A child stands nearer, perhaps having lost a parent or sibling. The engraving is signed Jackson.

From Stratford Church and font, we turn not unnaturally to the church of (Fig. 1305), in the heart of the woodland district, some five or six miles in a nort-west direction, where the poet’s father and mother [i.e. Shakespeare’s parents] were married; and to (Fig. 1315), also in the neighbourhood of Stratford, where no doubt the wandering bard has often paused to admire the picturesque building, perhaps to “stand by and mark” while some funereal procession passed into it, and his imagination busied itself with the feelings stirred to the very depths of the mourners’ hearts; or, pleasanter occupation, to gaze with earnest and admiring eye upon some village bride led in all her virgin loveliness to the altar by the youth of her choice, to whom with quivering lips, but unfaltering heart, she resigns the care of her future life and welfare. (p. 373)