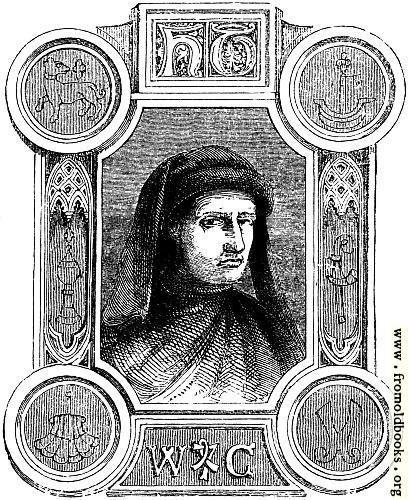 The famous mercer, William Caxton (Fig. 1372), came back to England with those few,and simple, and rude implements which had cost him so much wealth, labour, time, and anxiety to obtain; and then, from the precincts of Westminster Abbey, speedily issued the art of printing. And certainly it is an extraordinary fact, that the power that wass to destroy the supremacy of the Roman Catholic Church, with all those rank abuses which a gentler mode of treatment might have failed to remove, should have issued as it were from its own boso; and one calculated to enhance our estimation of that church; for, of all the services rendered by it to humanity—and who can doubt but that these were many and momentous?—none can be compared with that which we owe to it, in connection with the most magical of all arts and instruments—printing and the press.

Caxton—a name ever to be revered by all who have faith in and a yearning for the progress of mankind, which he, in connection with the establishment of such a literature as that of England, has done more perhaps to promote than any other man, working with similar material agencies—Caxton came to England about 1473 or 1474, and—ominous locality—was located, it has been supposed, in the scriptorium of the Abbey, the place where its transcribers were wont to be employed; at all events it is certain that he began to print in some building either forming a part of the actual abbey, or directly connected with it; and that the Abbot Milling, and probably Milling’s successor, Esteney, patronised him. Caxton’s residence appears to have been a house in the Almonry (Fig. 1355). Caxton’s publications were of a very miscellaneous character, such as treatises on heraldry, hawking and chess (Fig. 1373); romances of religion and literature; translations of classical works; chronicals &c.; all, no doubt, carrying out, as far as circumstances would permit, his desier, which was to make books capable of “instructing the ignorant in wisdom and virtue.” But Caxton, too, must be presented at court, and make his offering—a most memorable one—the first English printed book ever presented to an English monarch.” (p. 383)