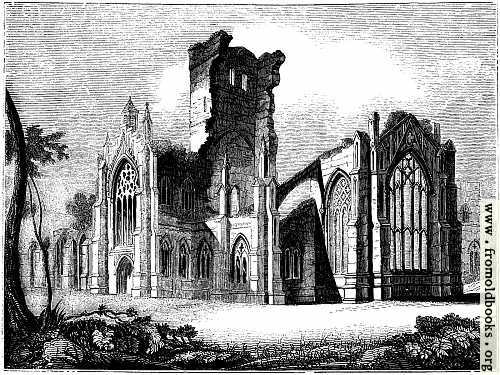 Some of the general features of the great abbeys of the Cistercian order, that we have noticed in England, we find repeated in the Scottish houses Melrose and New Abbey. The former, the mother Cistercian church of Scotland, was founded in 1136, by that “sore saint for the Crown,” as James VI. styled his ancestor, the royal David I., when he found how his revenues were impoverished by that saint’s pious doings. The monks came from Rivaulx Abbey in Yorkshire; they were wealthy and numerous (nearly a hundred), and have left no good character behind them. The old border ballad thus slily alludes to their luxury and rapacity—

O the monks of Melrose made gude kale
On Friday, when they fasted;
They wanted neither beef nor ale
As long as their neighbours’ lasted.

As usual, the remains are those of the church (Fig. 1057). The length of the namve and choir together is two hundred and fifty-eight feet, that of the transept one hundred and thirty feet. In this fabric, in Mr. Hutchinson’s opinion, are the finest lessons in, and the greatest variety of, Gothic ornaments that the island affords.” (p. 299)