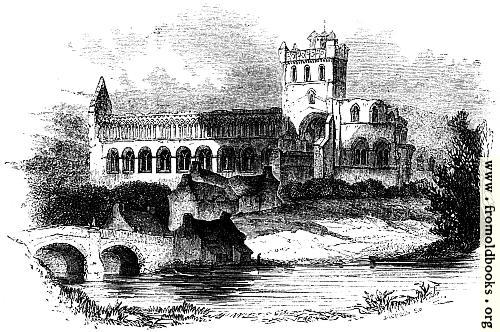 The Black Canons were introduced into Scotland about the same time as in England. One of their houses was at Jedburgh, the inmates [sic] of which came from Beauvais in France, early in the twelfth century. It suffered greatly in the visitations of the English, was pillaged and burned by Surrey, in 1253, at the storming of Jedburgh, and injured by Hertford in 1545. We have now only the ruins of the church (Fig. 1056), two hundred and thirty feet in length. The central tower is one hundred feet high. There are two beautiful Norman doors, and a fine west gable. The style is Norman and early English. Foundations of the abbey are traceable to a considerable distance. The burial ground is very spacious. Jedburgh parish was in old days celebrated for its castles, fortified dwellings, and magnificent ecclesiastical establishments; and for the picturesque woodland scenery amid which they were situated.” (p. 298)

The abbey was founded in 1138. Today it is run by Historic Scotland.