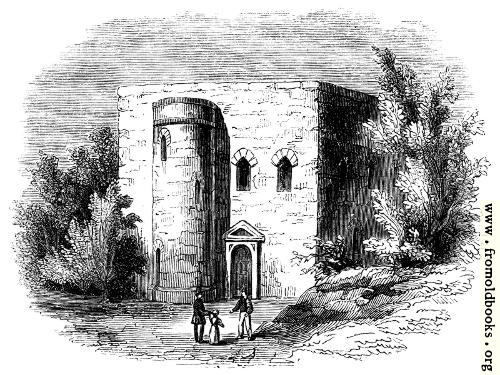 From a sketch by Dr. Stukeley, before its destruction in 1775

One of the most important events recorded in our annals in connection with the privilege of Sanctuary, furnishes us incidentally with a very striking view of the nature of that privilege, and of the classes of the people who chiefly used or abused it; we refer to the residence of the queen of Edward IV., and her younger son, the Duke of York, in the Sanctuary of Westminster, of which the building shown in page 193 (Fig. 736) formed at once the church below and the place of residence for the sanctuary people above. This remained till 1775, and was then, with great labour and difficulty, on account of the strength of the walls, demolished. Edward died in 1483, and shortly after the queen received intelligence, a little before midnight, in the palace at Westminster, that her eldest son, now Edward V., was in the hands of his uncle Gloucester, and that although he was treated with all seeming reverence, his and her nearest relations and friends had been arrested and sent no man knew whither. In great alarm, the queen suddenly removed to the place where, in a time of former difficulty, when her husband was a fugitive on the seas, she had obtained shelter, and where her eldest son had been born—the neighbouring Sanctuary. The Lord Chancellor (the Archbishop of York) received, by a secret messenger the same night, similar information from Lord Hastings, with the assurance that “all should be well.” “Be it as well as it will,” observed the startled Chancellor, “it will never be as well as it hath been;" and therewith he called his armed retainers about him, and then taking the Great Seal, hurried with kindly promptitude to the queen. It was a woful picture —that which he beheld on reaching Westminster, the unhappy mother sitting alow on the rushes, all desolate, and dismayed, whilst around her crowds of servants were hurrying into the Sanctuary with chests and packages trussed on their backs, that they had brought from the palace, and in their haste breaking down the wall in one part to make a nearer way. Lord Hastings’ message fell even more coldly on the queen’s ear than on the archbishop’s. “Ah! woe worth him,” said she, “he is one of them that laboureth to destroy me and my blood.” Having delivered the seal, with a warm protestation of his own fidelity, the archbishop departed to his home; but the first glance of the river at daybreak seems to have cooled his generous enthusiasm. As he looked from his chamber window he beheld the Thames full of the Duke of Gloucester’s servants, watching that no man should go to sanctuary, nor any leave it unexamined. He began to think he had been somewhat rash, and so sent for the Seal back. He had done enough, however, to make him a marked man. At the next meeting of the Privy Council, he was sharply reproved, and the Seal taken from him and given to the Bishop of Lincoln. And now arose the question, what was to be done concerning the queen, and her younger son, the Duke. Gloucester, of course, saw from the first that to attain the crown both the princes must be destroyed; one was in his hands, but the other in the most impregnable of strongholds, the Sanctuary. (p. 207)

The two young princes, of course, were captured and killed in the Tower of London.