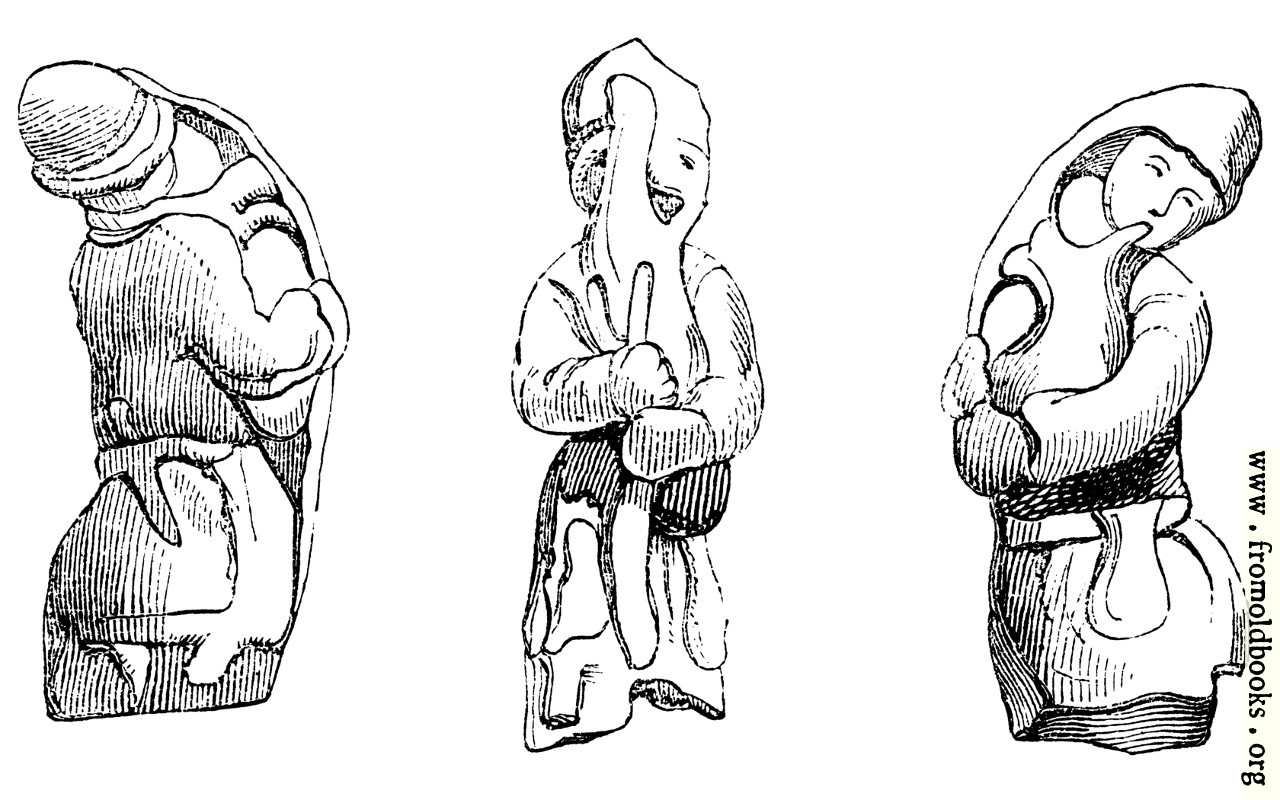 A woodcut showing three views of a bronze statuette, supposedly Ancient Roman, depicting a Roman soldier playing the bagpipes. I couldnot find a modern picture of the object.

In the bean-field within the walls of Richborough there was a space where no beans grew, which we could not approach without trampling down the thick crop. We knew what was the cause of that patch of unfertility. We had learnt from the work of Mr. King, who had derived his information from Mr. Boys, the local historian of Sandwich, that there was, “at the depth of a few feet, between the soil and rubbish, a solid regular platform, one hundred and forty-four feet in length, and a hundred and four feet in breadth, being a most compact mass of masonry composed of flint stones and strong coarse mortar.” This great platform, “as hard and entire in every part as a solid rock,” is pronounced by King to have been “the great parade, or Augurale, belonging to the Prætorium, where was the Sacellum for the eagles and ensigns, and where the sacrifices were offered.” But upon this platform is placed a second compact mass of masonry, rising nearly five feet above the lower mass, in the form of a cross, very narrow in the longer part which extends from the south to the north (or, to speak more correctly, from the south-west to the north-east), but in the shorter transverse of the cross, which is forty-six feet in length, having a breadth of twenty-two feet. This cross, according to King, was the site of the Sacellum. Half a century ago was this platform dug about and under, and brass and lead, and broken vessels were found, and a curious little bronze figure of a Roman soldier playing upon the bagpipes (Fig. 102). Again has antiquarian curiosity been set to work, and labourers are now digging and delving on the edge of the platform, and breaking their tools against the iron concrete. The workmen have found a passage along the south and north sides of the platform, and have penetrated, under the platform, to walls upon which it is supposed to rest, whose foundations are laid twenty-eight feet lower. Some fragments of pottery have been found in this last excavation, and the explorers expect to break through the walls upon which the platform Tests, and find a chamber. It may be so.