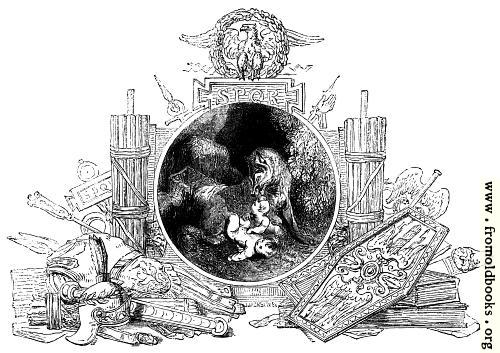 In the latter part of the summer of the year 55 B. C. (Halley, the astronomer, has gone far to prove that the exact day was the 26th of August), a Roman fleet crossed the Channel, bearing the infantry of two legions, about ten thousand men.

The symbols of the great republic were henceforward to become more familiar to the skin-clothed and painted Britons (Fig. 79); but not as yet were they to be bound with the chain of the captive (Fig. 81).” (p. 26)

The woodcut shows two naked boys (the babies Romulus and Remus, founders of Rome) being suckled by a wolf in a cave. On top of all is the Roman eagle with the laurel wreath of victory; below are Roman spears, the bundles of sticks under which a conquering army must pass (maybe?) a banner SPQR, helmts, a shield, an eagle banner, a quiver of arrows, a sword in its scabbard or sheath, a battering ram and some books, although the Romans used scrolls rather than books.

The acronym SPQR stands for Senatus Populusque Romanus which is, The Senate and the People of Rome, used as the signature of the government, for example on inscriptions and coins and more famously on the standards carried into battle by the Roman legions. The eagle has always been the symbol of a warlike nation, so the enduring memory of Rome is of a conquoring nation.

The woodcut is signed by the engraver, Jackson.