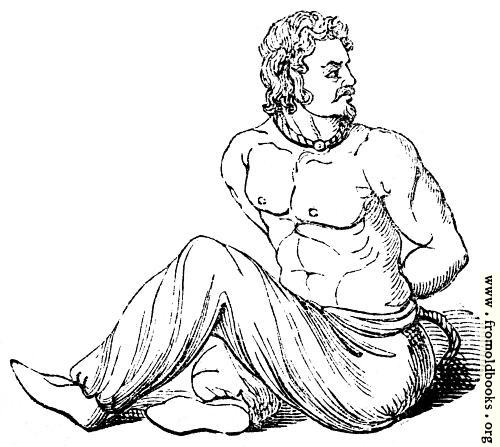 Torques, or gold and bronze necklaces composed of flexible bars, were peculiar to the people of this country.” (p. 22)

“The symbols of the great republic were henceforward to become more familiar to the skin-clothed and painted Britons (Fig. 79); but not as yet were they to be bound with the chain of the captive (Fig. 81).” (p. 26)

It is not clear whether the image depicts an ancient Briton, or Celt, wearing his torque, and captured by the Romans perhaps to be sold into slavery, or whether the torque was placed by a Briton onto a captured Roman. I think by the hair style that the half-naked prisoner is a Briton.