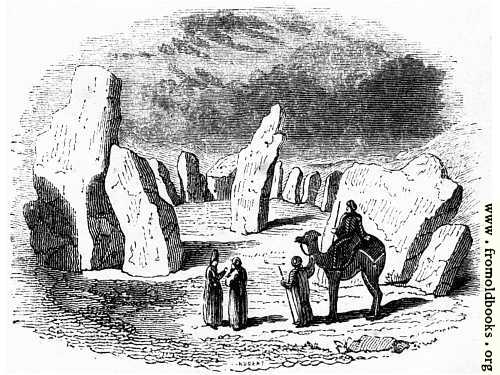 Legend ascribes the foundation of the city to Darius, hence its name Darab-gerd (Darius-town)

Figures 7 and 8 represent a Druidical circle, and a single upright stone standing alone near the circle, which are described by Sir William Ouseley as seen by him at Darab, in the province of Fars, in Persia. Our engravings are copied from those in Sir William Ouseley’s book. We have placed them upon the same page with the representations of Stonehenge [Figs 1 to 6]. If we had obliterated the oriental figures, superficial observation might easily receive them as representations of Stonehenge from another point of view.

“The circle of stones at Darab is surrounded by a wide and deep ditch and a high bank of earth; there is a central stone, and a single upright stone at some distance from the main group. The resemblance of the circle at Darab to the general arrangement of Stonehenge, and other similar monuments of Europe, led Sir William Ouseley to the natural conclusion that a “British antiquary might be almost authorized to pronounce it Druidical, according to the general application of the word among us.” At Darab there is a peculiarity which isnot found at Stonehenge, at least in its existing state. Under several of the stones there are recesses, or small caverns. In this particular, and in the general rudeness of its construction, the circle of Darab resembles the Druidical circle of Jersey ([Fig.] 9), although the circle there is very much smaller, and the stones of very inconsiderable dimensions,—a copy in miniature of such vast works as those of Stonehenge and Avebury.” (p. 6)