The Goetia: The Lesser Key of Solomon the King (page 8/8) 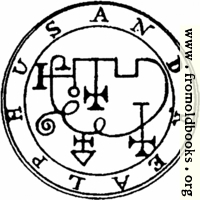 
(65.) Andrealphus. — The Sixty-fifth Spirit is Andrealphus. He is a Mighty Marquis, appearing at first in the form of a Peacock, with great Noises. But after a time he putteth on Human shape. He can teach Geometry perfectly. He maketh Men very subtle therein; and in all Things pertaining unto Mensuration or Astronomy. He can transform a Man into the Likeness of a [...] [more...] [$] 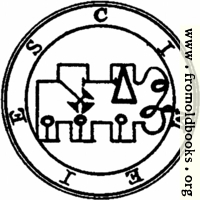 
(66.) Cimejes, or Cimeies, or Kimaris. — The Sixty-sixth Spirit is Cimejes, or Cimeies, or Kimaris. He is a Marquis, Mighty, Great, Strong and Powerful, appearing like a Valiant Warrior riding upon a goodly Black Horse. He ruleth over all Spirits in the parts of Africa. His Office is to teach perfectly Grammar, Logic, Rhetoric, and to discover things Lost or Hidden, and Treasures. He [...] [more...] [$] 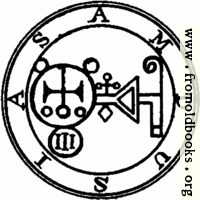 
(67.) Amdusias, or Amdukia. — The Sixty-seventh Spirit is Amdusias, or Amdukias. He is a Duke Great and Strong, appearing at first like a Unicorn, but at the request of the Exorcist he standeth before him in Human Shape, causing Trumpets, and all manner of Musical Instruments to be heard, but not soon or immediately. Also he can cause Trees to bend and incline according to [...] [more...] [$] 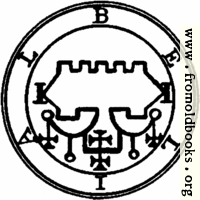 
(68.) Belial. — The Sixty-eighth Spirit is Belial. He is a Mighty and a Powerful King, and was created next after Lucifer. He appeareth in the Form of Two Beautiful Angels sitting in a Chariot of Fire. He speaketh with a Comely Voice, and declareth that he fell first from among the worthier sort, that were before Michael, and other Heavenly Angels. His Office is to distribute Presentations and Senatorships, etc.; and to cause favour of Friends and of Foes. He giveth excellent [...] [more...] [$] 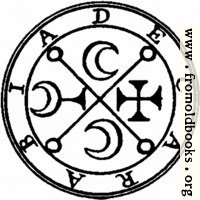 
(69.) Decarabia. — The Sixty-ninth Spirit is Decarabia. He appeareth in the Form of a Star in a Pentacle, at first; but after, at the command of the Exorcist, he putteth on the image of a Man. His Office is to discover the Virtues of Birds and Precious Stones, and to make the Similitude of all kinds of Birds to fly before the Exorcist, singing and drinking as natural [...] [more...] [$] 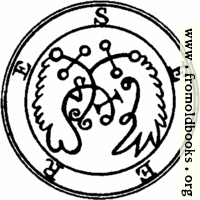 
Seere, Sear, or Seir. — The Seventieth Spirit is Seere, Sear, or Seir. He is a Mighty Prince, and Powerful, under Amaymon, King of the East. He appeareth in the Form of a Beautiful Man, riding upon a Winged Horse. His Office is to go and come; and to bring abundance of things to pass on a sudden, and to carry or recarry anything whither thou wouldest have it to go, or whence thou wouldest have it from. He can pass over the whole Earth in the twinkling of an Eye. He giveth [...]impartial – Liam] Good Nature, and is willing to do anything which the Exorcist desireth. He governeth 26 Legions of Spirits. And this his Seal is to be worn, etc. [more...] [$] 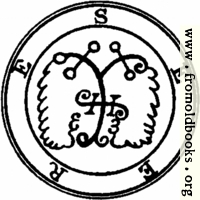 
Alternate form of the Seal of Seere. [$] 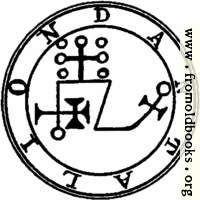 
(71.) Dantalion. — The Seventy-first Spirit is Dantalion. He is a Duke Great and Mighty, appearing in the Form of a Man with many Countenances, all Men’s and Women’s Faces; and he hath a Book in his right hand. His Office is to teach all Arts and Sciences unto any; and to declare the Secret Counsel of any one; for he knoweth the Thoughts of all Men and Women, and [...] [more...] [$] 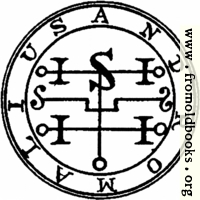 
(72.) Andromalius. — The Seventy-second Spirit in Order is named Andromalius. He is an Earl, Great and Mighty, appearing in the Form of a Man holding a Great Serpent in his Hand. His Office is to bring back both a Thief, and the Goods which be stolen; and to discover all Wickedness, and Underhand Dealing; and to punish all Thieves and other Wicked People and also [...] [more...] [$]

The Magical Circle of King Solomon


Magical circle of protection against daemons, and triangle of containment. Figures 124 and 125 are combined on the same page: the circle and the triangle, respectively. Once cannot suppose that it could be in fact precisely a circle of Solomon, with Latin letters and English on it, as well as references to Greek. Even if we assume the English to be [...] [more...] [$]