The Goetia: The Lesser Key of Solomon the King (page 5/8) 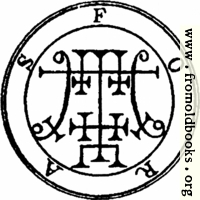 
(31.) Foras. — The Thirty-first Spirit is Foras. He is a Mighty President, and appeareth in the Form of a Strong Man in Human Shape. He can give the understanding to Men how they may know the Virtues of all Herbs and Precious Stones. He teacheth the Arts of Logic and Ethics in all [...]invisible], and to live long, and to be eloquent. He can discover Treasures and recover things Lost. He ruleth over 29 Legions of Spirits, and his Seal is this, which wear thou, etc. [more...] [$] 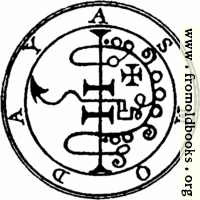 
(32.) Asmoday. — The Thirty-second Spirit is Asmoday, or Asmodai. He is a Great King, Strong, and Powerful. He appeareth with Three Heads, whereof the first is like a Bull, the second like a Man, and the third like a Ram; he hath also the tail of a Serpent, and from his mouth issue Flames of Fire. His Feet are webbed like those of a Goose. He sitteth upon an Infernal [...]Amaymon, he goeth before all other. When the Exorcist hath a mind to call him, let it be abroad, and let him stand on his feet all the time of action, with his Cap or Headdress off; for if it be on, Amaymon will deceive him and call all his actions to be betrayed [probably reading; fac simile has bewrayed]. But as soon as the Exorcist seeth Asmoday in the shape aforesaid, he shall call him by his Name, saying: “Art thou Asmoday?” and he will not deny it, and by-and-by he will bow down unto the ground. He giveth the Ring of Virtues; he teacheth the Arts of Arithmetic, Astronomy, Geometry, and all handicrafts absolutely. He giveth true and full answers unto thy demands. He maketh one Invincible. He showeth the place where Treasures lie, and guardeth it. He, amongst the Legions of Amaymon governeth 72 Legions of Spirits Inferior. His Seal is this which thou must wear as a Lamen upon thy breast, etc. [more...] [$] 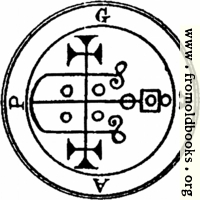 
(33.) Gäap. — The Thirty-third Spirit is Gäap. He is a Great President and a Mighty Prince. He appeareth when the Sun is in some of the Southern Signs, in a Human Shape, going before Four Great and Mighty Kings, as if he were a Guide to conduct them along on their way. His Office is to make men Insensible or Ignorant; as also in Philosophy to make them Knowing, [...]Amaymon his King. He can deliver Familiars out of the Custody of other Magicians, and answereth truly and perfectly of things Past, Present, and to Come. He can carry and re-carry men very speedily from one Kingdom to another, at the Will and Pleasure of the Exorcist. He ruleth over 66 Legions of Spirits, and he was of the Order of Potentates. His Seal is this to be made and to be worn as aforesaid, etc. [more...] [$] 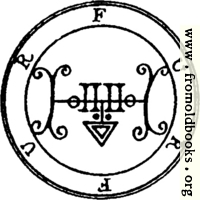 
(34.) Furfur. — The Thirty-fourth Spirit is Furfur. He is a Great and Mighty Earl, appearing in the Form of an Hart with a Fiery Tail. He never speaketh truth unless he be compelled, or brought up within a triangle, △. Being therein, he will take upon himself the Form of an Angel. Being bidden, he speaketh with a hoarse voice. Also he will wittingly urge Love [...] [more...] [$] 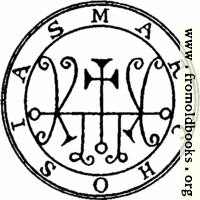 
(35.) Marchosias. — The Thirty-fifth Spirit is Marchosias. He is a Great and Mighty Marquis, appearing at first in the Form of a Wolf [In one Codex of the seventeenth century, very badly [...]Trans. {For me he appeared always like an ox, and very dazed. – Ed.}] having Gryphon’s Wings, and a Serpent’s Tail, and Vomiting Fire out of his mouth. But after a time, at the command of the Exorcist he putteth on the Shape of a Man. And he is a strong fighter. He was of the Order of Dominations. He governeth 30 Legions of Spirits. He told his Chief, who was Solomon, that after 1,200 years he had hopes to return unto the Seventh Throne. And his Seal is this, to be made and worn as a Lamen, etc. [more...] [$] 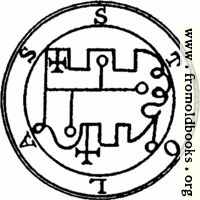 
(36.) Stolas, or Stolos. — The Thirty-sixth Spirit is Stolas, or Stolos. He is a Great and Powerful Prince, appearing in the Shape of a Mighty Raven at first before the Exorcist; but after he taketh the image of a Man. He teacheth the Art of Astronomy, and the Virtues of Herbs and Precious Stones. He governeth 26 [...] [more...] [$] 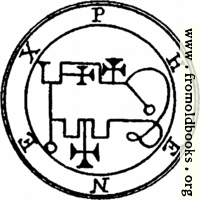 
(37.) Phenex, or Pheynix. The Thirty-Seventh Spirit is Phenex (or Pheynix). He is a great Marquis, and appeareth like the Bird Phoenix [Phœnix], having the Voice of a Child. He singeth many sweet notes before the Exorcist, which he must not regard, but by-and-by he must bid him put on Human Shape. Then he will speak marvellously of all wonderful Sciences if required. He is [...] [more...] [$] 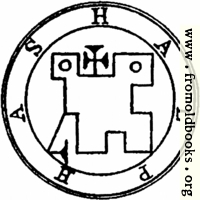 
(38.) Halphas or Malthus. — The Thirty-eighth Spirit is Halphas, or Malthous (or Malthas). He is a Great Earl, and appeareth in the Form of a Stock-Dove. He speaketh with a hoarse Voice. His Office is to build up Towers, and to furnish them with Ammunition and Weapons, and to send Men-of-War [that is, soldiers, men-at-arms—Liam] to places appointed. He ruleth [...] [more...] [$] 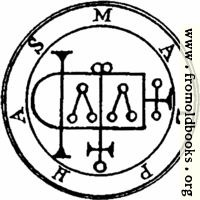 
(39.) Malphas. — The Thirty-ninth Spirit is Malphas. He appeareth at first like a Crow, but after he will put on Human Shape at the request of the Exorcist, and speak with a hoarse Voice. He is a Mighty President and Powerful. He can build Houses and High Towers, and can bring to thy Knowledge Enemies’ Desires and Thoughts, and that which they have done. He giveth [...] [more...] [$] 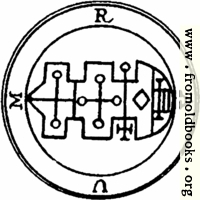 
(40.) Raüm. — The Fortieth Spirit is Räum. He is a Great Earl; and appeareth at first in the Form of a Crow, but after the Command of the Exorcist he putteth on Human Shape. His office is to steal Treasures out [of] King’s Houses, and to carry it whither he is commanded, and to destroy Cities and Dignities of Men, and to tell all things, Past and What Is, and [...] [more...] [$] 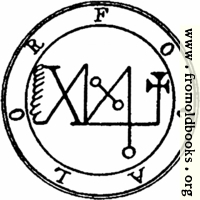 
(41.) Focalor. — The Forty-first Spirit is Focalor, or Forcalor, or Furcalor. He is a Mighty Duke and Strong. He appeareth in the Form of a Man with Gryphon’s Wings. His office is to slay Men, and to drown them in the Waters, and to overthrow Ships of War, for he hath Power over both Winds and Seas; but he will not hurt any man or thing if he be commanded to the [...] [more...] [$] 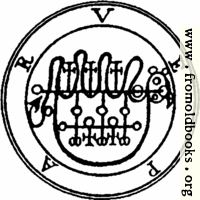 
(42.) Vepar. — The Forty-second Spirit is Vepar, or Vephar. He is a Duke Great and Strong, and appeareth like a Mermaid. His office is to govern the Waters and Ships laden with Arms, Armour, and Ammunition, etc., thereon. And at the request of the Exorcist he can cause the seas to be right stormy and to appear full of ships. Also he maketh men to die in Three [...] [more...] [$]