The Goetia: The Lesser Key of Solomon the King (page 3/8) 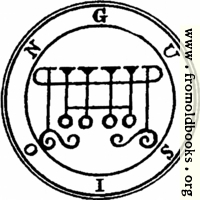 
(11.) Gusion. — The Eleventh Spirit in order is a great and strong Duke, called Gusion. He appeareth like a Xenopilus. He telleth all things, Past, Present, and to Come, and showeth the meaning and resolution of all questions thou mayest ask. He conciliateth and reconcileth friendships, and giveth Honour and Dignity unto any. He ruleth over 40 Legions of Spirits. [...] [more...] [$] 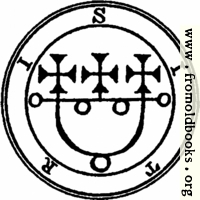 
(12.) Sitri. — The Twelfth Spirit is Sitri. He is a Great Prince and appeareth at first with a Leopard’s head and the Wings of a Gryphon, but after the command of the Master of the Exorcism he putteth on Human shape, and that very beautiful. He enflameth Men with Women’s love, and Women with Men’s love; and causeth them also to show themselves naked if it be [...] [more...] [$] 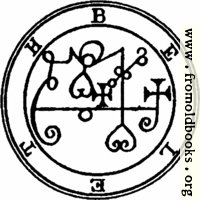 
(13.) Beleth. — The Thirteenth Spirit is called Beleth (or Bileth, or Bilet). He is a mighty King and terrible. He rideth on a pale horse with trumpets and other kinds of musical instruments playing before him. He is very furious at his first appearance, that is, while the Exorcist layeth his courage; for to do this he must hold a Hazel Wand in his hand, striking [...]△, without the Circle, and then command him into it by the Bonds and Charges of Spirits as hereafter followeth. And if he doth not enter into the triangle, △, at your threats, rehearse the Bonds and Charms before him, and then he will yield Obedience and come into it, and do what he is commanded by the Exorcist. Yet he must receive him courteously because he is a Great King, and do homage unto him, as the Kings and Princes do that attend upon him. And thou must have always a Silver Ring on the middle finger of the left hand held against thy face, as they do yet before Amaymon. This Great King Beleth causeth all the love that may be, both of Men and of Women, until the Master Exorcist hath had his desire fulfilled. He is of the Order of Powers, and he governeth 85 Legions of Spirits. His Noble Seal is this, which is to be worn before thee at working. [more...] [$] 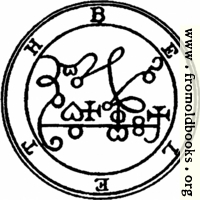 
See The Seal of Beleth for details. [$] 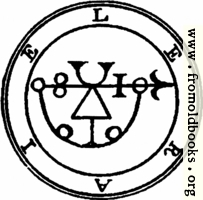 
(14.) Leraje or Leraikka. — The Fourteenth Spirit is called Leraje (or Leraie). He is a Marquis Great in Power, showing himself in the likeness of an Archer clad in Green, and carrying a Bow and Quiver. He causeth all great Battles and Contests; and maketh wounds to putrefy that are made with Arrows by Archers. This belongeth unto Sagittary. He [...] [more...] [$] 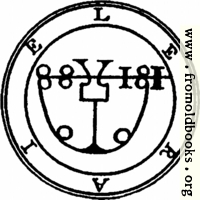 
A second version of the seal for Leraje. Be careful to use the right one. [$] 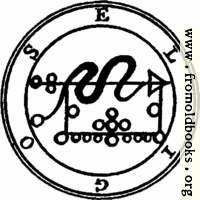 
(15.) Eligos. — The Fifteenth Spirit in Order is Eligos, a Great Duke, and appeareth in the form of a goodly Knight, carrying a Lance, an Ensign, and a Serpent. He discovereth hidden things, and knoweth things to come; and of Wars, and how the Soldiers will or shall meet. He causeth the Love of Lords and Great Persons. He [...] [more...] [$] 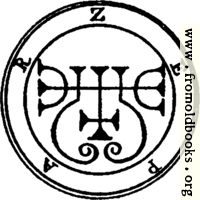 
(16.) Zepar. — The Sixteenth Spirit is Zepar. He is a Great Duke, and appeareth in Red Apparel and Armour, like a Soldier. His office is to cause Women to love Men, and to bring them together in love. He also maketh them barren. He governeth 26 Legions of Inferior Spirits, and [...] [more...] [$] 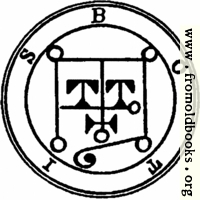 
(17.) Botis. — The Seventeenth Spirit is Botis, a Great President, and an Earl. He appeareth at the first show in the form of an ugly Viper, then at the command of the Magician he putteth on a Human shape with Great Teeth, and two Horns, carrying a bright and sharp Sword in his hand. He telleth all things Past, and to Come, and reconcileth Friends and Foes. [...] [more...] [$] 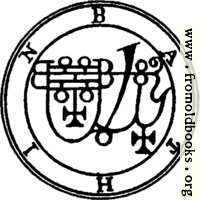 
(18.) Bathim. — The Eighteenth Spirit is Bathin. He is a Mighty and Strong Duke, and appeareth like a Strong Man with the tail of a Serpent, sitting upon a Pale-Coloured Horse. He knoweth the Virtues of Herbs and Precious Stones, and can transport men suddenly from one country to another. He ruleth over 30 Legions of Spirits. [...] [more...] [$] 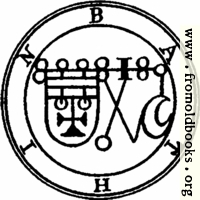 
A second version of the seal for Bathim. Be careful to use the right one. [$] 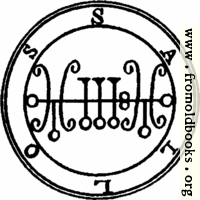 
(19.) Sallos. — The Nineteenth Spirit is Sallos (or Saleos). He is a Great and Mighty Duke, and appeareth in the form of a gallant Soldier riding on a Crocodile, with a Ducal Crown on his head, but peaceably. He causeth the Love of Women to Men, and of Men to Women; and [...] [more...] [$]