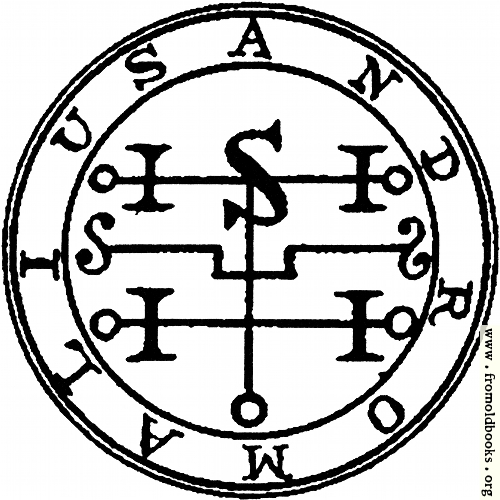 (72.) Andromalius. — The Seventy-second Spirit in Order is named Andromalius. He is an Earl, Great and Mighty, appearing in the Form of a Man holding a Great Serpent in his Hand. His Office is to bring back both a Thief, and the Goods which be stolen; and to discover all Wickedness, and Underhand Dealing; and to punish all Thieves and other Wicked People and also to discover Treasures that be Hid. He ruleth over 36 Legions of Spirits. His Seal is this, the which wear thou as aforesaid, etc.

These be the 72 Mighty Kings and Princes which King Solomon Commanded into a Vessel of Brass, together with their Legions. Of whom Belial, Bileth, Asmoday, and Gaap, were Chief. And it is to be noted that Solomon did this because of their pride, for he never declared other reason why he thus bound them [some pretty suspect reasoning here! — Liam]. And when he had thus bound them up and sealed the Vessel, he by Divine Power did chase them all into a deep Lake or Hole in Babylon. And they of Babylon, wondering to see such a thing, they did then go wholly into the Lake, to break the Vessel open, expecting to find great store of Treasure therein. But when they had broken it open, out flew the Chief Spirits immediately, with their Legions following them; and they were all restored to their former places except Belial, who entered into a certain Image, and thence gave answers unto those who did offer Sacrifices unto him, and did worship the Image as their God, etc.