The Goetia: The Lesser Key of Solomon the King (page 4/8) 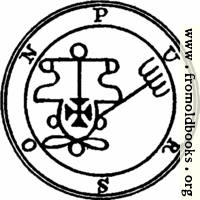 
(20.) Purson. — The Twentieth Spirit is Purson, a Great King. His appearance is comely, like a Man with a Lion’s face, carrying a cruel Viper in his hand, and riding upon a Bear. Going before him are many Trumpets sounding. He knoweth all things hidden, and can discover Treasure, and tell all things Past, Present, and to Come. He can take a Body either Human [...] [more...] [$] 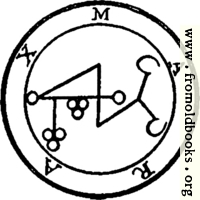 
(21.) Marax or Morax. — The Twenty-first Spirit is Marax. He is a Great Earl and President. He appeareth like a great Bull with a Man’s face. His office is to make Men very knowing in Astronomy, and all other Liberal Sciences; also he can give good Familiars, and wise, knowing the virtues of Herbs and Stones which be precious. He governeth 30 Legions of Spirits, [...] [more...] [$] 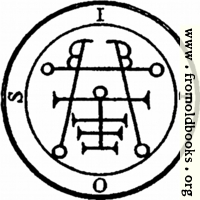 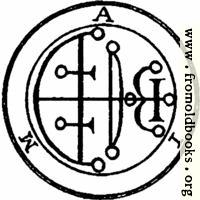 
(23.) Aim. — The Twenty-third Spirit is Aim. He is a Great Strong Duke. He appeareth in the form of a very handsome Man in body, but with three Heads; the first, like a Serpent, the second like a Man having two Stars on his Forehead, the third like a Calf. He rideth on a Viper, carrying a Firebrand in his Hand, wherewith he setteth cities, castles, and great [...] [more...] [$] 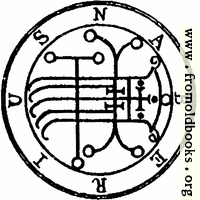 
(24.) Naberius. — The Twenty-fourth Spirit is Naberius. He is a most valiant Marquis, and showeth in the form of a Black Crane, fluttering about the Circle, and when he speaketh it is with a hoarse voice. He maketh men cunning in all Arts and Sciences, but especially in the Art of Rhetoric. He restoreth lost Dignities and Honours. He governeth 19 Legions of [...] [more...] [$] 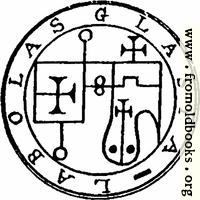 
(25.) Glasya-Labolas. — The Twenty-fifth Spirit is Glasya-Labolas. He is a Mighty President and Earl, and showeth himself in the form of a Dog with Wings like a Gryphon. He teacheth all Arts and Sciences in an instant, and is an Author of Bloodshed and Manslaughter. He teacheth all things Past, and to Come. If desired he causeth the love both of Friends and of Foes. [...] [more...] [$] 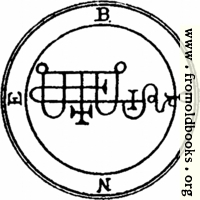 
(26.) Bune or Bine. — The Twenty-sixth Spirit is Bune. He is a Strong, Great and Mighty Duke. He appeareth in the form of a Dragon with three heads, one like a Dog, one like a Gryphon, and one like a Man. He speaketh with a high and comely Voice. He changeth the Place of the Dead, and causeth the Spirits which be under him to gather together upon your Sepulchres. He [...] [more...] [$] 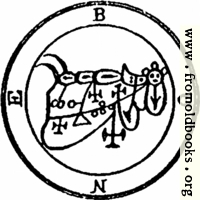 
A second form of the Seal of Bune, as described there. [$] 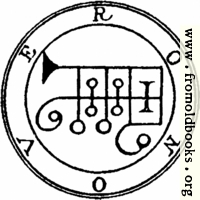 
(27.) Renove. — The Twenty-seventh Spirit is Ronove. He appeareth in the Form of a Monster. He teacheth the Art of Rhetoric very well and giveth Good Servants, Knowledge of Tongues, and Favours with Friends or Foes. He is a Marquis and Great Earl; and there be under his [...] [more...] [$] 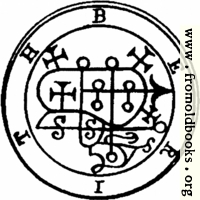 
(28.) Berith. — The Twenty-eighth Spirit in Order, as Solomon bound them, is named Berith. He is a Mighty, Great, and Terrible Duke. He hath two other Names given unto him by men of later times, viz.: Beale, or Beal, and Bofry or Bolfry. He appeareth in the Form of a Soldier with Red Clothing, riding upon a Red Horse, and having a Crown of Gold upon his head. He giveth true answers, Past, Present, and to Come. Thou must make use of a Ring in calling him forth, as is before spoken of regarding Beleth. He can turn all metals into Gold. He can give Dignities, and can confirm them unto [...] [more...] [$] 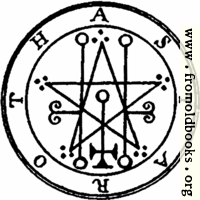 
(29.) Astaroth. — The Twenty-ninth Spirit is Astaroth. He is a Mighty, Strong Duke, and appeareth in the Form of an hurtful Angel riding on an Infernal Beast like a Dragon, and carrying in his right hand a Viper. Thou must in no wise let him approach too near unto thee, lest he do thee damage by his Noisome Breath. Wherefore the Magician must hold the Magical Ring [...] [more...] [$] 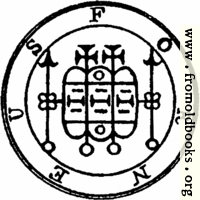 
(30.) Forneus. — The Thirtieth Spirit is Forneus. He is a Mighty and Great Marquis, and appeareth in the Form of a Great Sea-Monster. He teacheth, and maketh men wonderfully knowing in the Art of Rhetoric. He causeth men to have a Good Name, and to have the knowledge and understanding of Tongues. He maketh one to be beloved of his Foes as well as of his Friends. [...] [more...] [$]