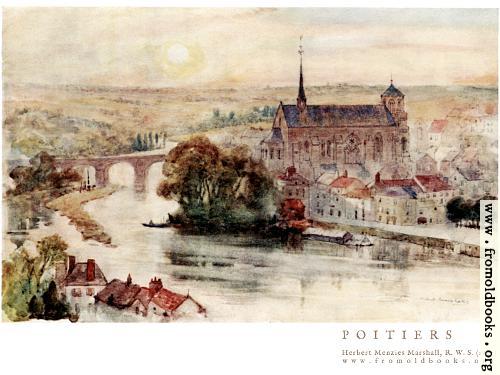 Saint Pierre at Poitiers [...] certain characteristics it has which connect it with the Angevin style, but unlike most of the Angevin churches, it has aisles throughout. From the outside the appearance is that of a single mass, long and low, and very wide, for the aisles are nearly as broad as the nave; as at Bourges, there is no central tower at the crossing; but then at Bourges we have a great French church, a mighty mass rising sheer up from the ground, un- broken by any transept; here at Poitiers there are transepts, but the line of their towers comes below the line of the roof, and the effect given is one of length without height. Height is also wanting in the two unfinished and unequal west towers, and the east end literally falls flat, by reason of its bare terminal wall; the apse, to which one grows so accustomed in a French church, is seen only from the interior. It is oblong in plan, showing, as M. VioUet-le-Duc points out, no sign either of choir or sanctuary. The tran- septs are more like side chapels with altars on their eastern walls. There is no sign of northern influ- ence, and the church is in many of its features unique and without imitators. Certain details of construc- tion bring it into line with St. Maurice at Angers; it is an ordinary example of the churches of Poitou, with their three naves of equal height and Byzantine cupolas.

To the south of the Cathedral lies what alone would make Poitiers worth a visit, without the other churches which call for notice—the little Temple Saint-Jean, said to be the oldest baptistery in France, and dating probably from the fourth century. (p. 270)