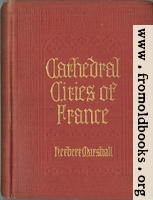 Frontispiece: Lâon, View From the Plain 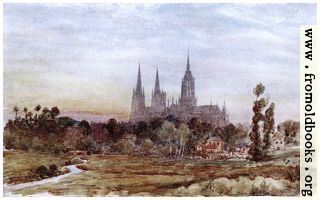 Bayeux from the Meadows


Bayeux itself is a quiet country town, built up one low hill and down another—a town of long streets and grey-shuttered houses, possessing three principle interests—the Cathedral, the Seminary Chapel and [...] Chartier, minstrel and court-poet to Charles VII., and author of that curious document, the “Curiale,” whose best praise lies in the fact that it was one of the earliest books selected for publication by Caxton. (p. 105) [more...] [$] 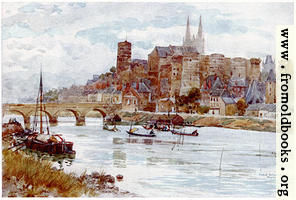 
“The French yearning to make everything new” has done its work in Angers, but through Fulk, Geoffrey, René, and the rest would be at a loss to recognise their old capital in the trim modern town, enough remains to show us what has been. No city standing as Angers does on rising ground above a wide river, with a mass of castle bastions sloping up [...] —it is clean and full of life, and altogether very far removed from the “black Angers” known to our ancestors. This mediæval and grm-sounding title, reminiscent of dungeons and tyrant princes, probably either meant that the ancient town was closely and squalidly built, or else referred to the dark slate with which the country abounds, and which might well have been used for buildig purposes all over the town, as we will see it in some houses by the river. [more...] [$] 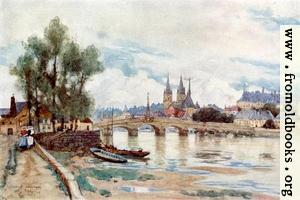 
The spires of Blois cathedral are seen across the River Loire. [more...] [$] 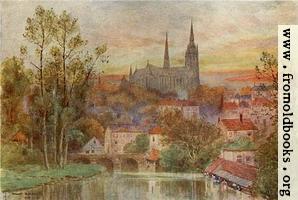 
Chartres Cathedral, Cathédrale Notre-Dame de Chartres, “Cathedral of Our Lady in Chartres” was rebuilt in the 13th century after it was destroyed by lightning in 1194. [more...] [$]


“The fourth attraction of Nevers, the high square gateway tower known as the Porte du Croux, may also be bregarded as a relic of feudal days, seeing that it dates from 1398, and was evidently part of the town’s defences. It is a noble specimen of mediæval defence, a tall gateway tower, protected, like the Porte Guillaume at Chartres, by its ancient fosse—long lancet openings running up above a low round archway and two pointed turrets flanking the hatchet-shaped central roof, with [...] [more...] [$] 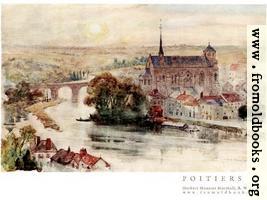 
Saint Pierre at Poitiers [...] certain characteristics it has which connect it with the Angevin style, but unlike most of the Angevin churches, it has aisles throughout. From the outside the appearance is that of a single mass, long and low, and very wide, for the aisles are nearly as broad as the nave; as at Bourges, there is no central tower at the [...] out, no sign either of choir or sanctuary. The tran- septs are more like side chapels with altars on their eastern walls. There is no sign of northern influ- ence, and the church is in many of its features unique and without imitators. Certain details of construc- tion bring it into line with St. Maurice at Angers; it is an ordinary example of the churches of Poitou, with their three naves of equal height and Byzantine cupolas. [more...] [$]