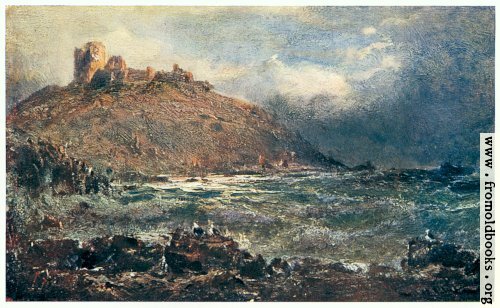 From the painting by Edwin Hayes, R.H.A. R.I.

The first place of note you come to over the undulating road from Portmadoc is , of which the demure aspect proclaims a watering-place of the better class, for it isnot big or noisy enough to attract the tripper. The houses which line its two bays are more beseem a parlimentary borough than the group of cottages which used to huddle beneath its castle. Of this ancient fortress, two towers and a gateway alone remain, looking landward from a steep rock between the bays, to preserve the memory of its doughty constable, Sir Howel y Fwyall (Sir Howel of the Axe) who was invested with the castle by the Black Prince, in return for valient services at Poietiers, where he is said to have cleft the neck of the French king’s horse at one blow, and to have taken the king himself prisoner. (p. 142)

The artist, Edwin Hayes, was originally from England but moved to Dublin as a boy; he later moved back to England. This painting appears to be in oils, and is very dramatic; it was sold in an auction in 2015. The painting itself measures only 16×26cm (roughly six inches high and ten inches wide).