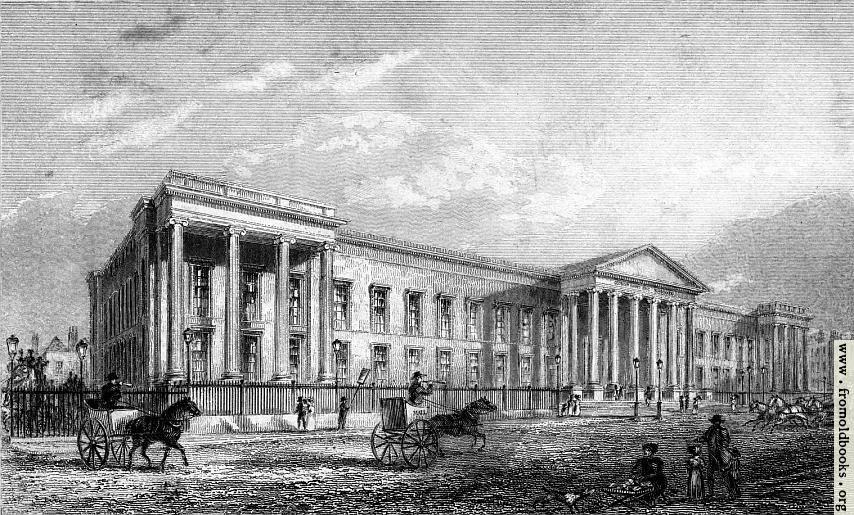 March 1830. The New Post-Office, London. (With an Engraving)

The magnificent building recently opened as the new metropolitan Post-Office is situated near the junction of Cheapside and Newgate-street, on the spot formerly occupied by the college and sanctuary of St. Martin-le-Grand.

It is one of the largest public edifices now existing in the City of London. The architect, Mr. Smirke, has employed in its construction his favourite order, the Grecian Ionic. The principal front, which is four hundred feet in length, has a grand and impressive effect, alike from the continuity and simplicity of its elevation, and from the solidity and magnificence of its proportions. The portico, which projects with two inter-columns at the sides, and is also recessed, has an air of space, and a depth of shadow, that contribute materially to enhance its effect. Its breadth is seventy [feet], and its depth twenty feet. Over the door is placed a clock, with a face both to the exterior and interior; and on each side are two pedastals, with strong reflecting lamps. In this front are forty-four windows.

The east front, in Foster-lane, has upwards of one hundred and eighty windows; and may be said to have the same appearance in relation to the other, as is usual with the backs of ordinary houses. The whole, however, is characterized by a simple and impressive character of due proportion.” (pp. 72 – 3).

“The new-Post-Office was first opened for business on Wednesday, September, 23d, 1829, a short time before five o’clock in the morning. The improved system enabled the inland officers to sort and arrange the letters by about eight o’clock, and at half-past eight they were ready for delivery.” (p. 75)

This is an incredibly fine engraving, and the scans do not do it justice; I scanned it at 1200dpi in 16-bit grayscale, but I would probably need to use 1600dpi colour to get a properly sharp reproduction.