Ladies at the Roman Palacedetails 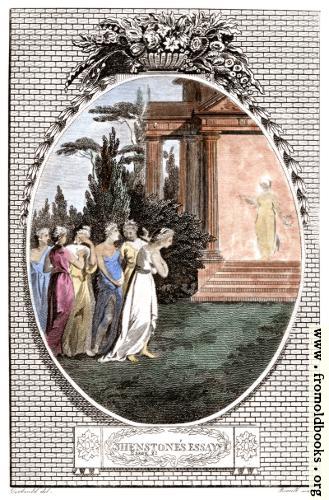 Ladies at the Roman Palace more

Ladies at the Roman Palace

The ladies and the ruined temple illustrate Essay XXI (21) in William Shenstone’s Essays on Men and Manners (1797):

I was, methought, transported into a winding valley, on each side of whose area, so far as my eye could fee, were held up (in the manner of a picture) all the pleasing objects either of art of nature. Hills rose one beyond another, crowned with trees, or adorned with edifices; broken rocks contrasted with lawns, and foaming rivers poured headlong over them; gilded spires enlivened even the sun-shine; and lonesome ruins, by the side of woods, gave a solemnity to the shade. It would be endless, or rather impossible, to give an idea of the vast variety. It seemed, as though people of whatever inclinations, might here meet with their favorite object.

While I stood amazed, and even confounded, at so astonishing a landskip; an old man approached towards me, and offered his assistance in alleviating my surprize. ‘You observe,’ says he, in the middle path, a train of sprightly female pilgrims [the passions], conducted by a matron [Reason] of a graver cast. She is habited, as you may observe, in a robe far more plain and simple than that of any amidst her followers. It is her province to restrain her pupils, that the objects glittering on each side may not seduce them to make excursions, from which they scarce ever find their right way again. You may not, perhaps, suspect the gulphs and precipices that lie intermixed amidst a scenery so delightful to the eye. You see, indeed, at a considerable distance, the gilt dome of a temple, raised on columns of the whitest marble. I must inform you, that within this temple resides a lady [Virtue], weaving wreaths of immortal amaranth for that worthy matron, if she exert her authority; and, as their obedience is more or less entire, she has also garlands of inferior lustre to recompence the ladies in her train.’

‘Your own sagacity,’ added he, ‘will supply the place of farther instructions;’ and then vanished in an instant. (p. 30)

Just the background for use as an unusual border


Warning: include(/home/liam/f/lib/footer-nojq-lazy.php): failed to open stream: No such file or directory in /home/liam/public_html/fromoldbooks.org/SamuelJohnson-TheIdler/pages/21-ladies-at-the-roman-palace/index.html on line 321