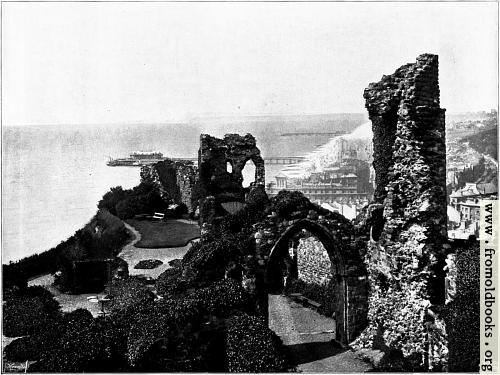 From a Photo. by Poulton & Son.

HASTINGS.—Hastings Castle stands on the brink of the cliff, and presents the most striking view to be found in Sussex. Its principal entrance was necessarily on the land side, where the portcullis groove and the hooks for the gate-hinges may yet be examined. The Castle area occupied about an acre and a quarter. The south side was 400ft. long, and the east side 300ft., with a fosse and a massive wall, strengthened by three semi-circular towers whose fragments are still interesting. The north-west side was a little more than 400ft. in length. To the west, both a square and a circular tower are still standing, also a doorway which formerly opened into the Royal Chapel of St. Mary.

There are many delightful walks in the immediate vicinity of Hastings. The bold, bleak ascent of Fairlight Down is 600ft. above the sea, and commands the whole sweep of the coast from Beachy Head to the South Foreland. The village of fairlight contains about 500 inhabitants. Passing the residence of Fairlight Place, one descends into the leafy and blossomy depths of Fairlight Glen, and proceeds to the Dripping Well, where, under the shadow of a glorious beech tree, a bright, shimmering streamlet plashes over the rock. A path along the hill-side leads hence to the famous Lovers’ Seat, where one may sit upon a rude oak bench and look out afar over the sea. Hastings castle now belongs to the Earl of Chichester, but admittance may be gained at any time to see the ruins—except, of course, on Sundays—on payment of a fee of threepence.” (p. 53)

The photograph is marked “Meisenbach” which could be the name of the artist, or, as pointed out by a reader comment, is more likely to indicate that the Meisenbach half-tone screening process was used to print the photograph.

Hi
The photo was printed using the Meisenbach half-tone process, hence the name on the image. Hr M. was not the photographer.
Regards
Graham