Fowey: Entrance to the harbour.details 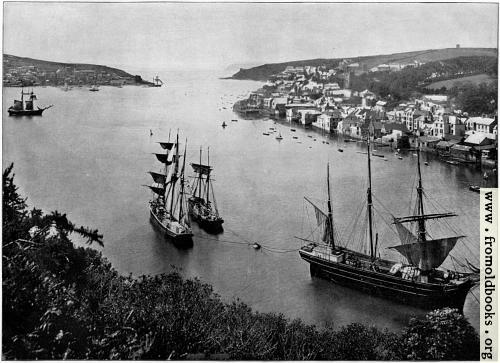 Fowey: Entrance to the harbour., in Fowey, Cornwall, England more

Fowey: Entrance to the harbour.

FOWEY.—This has been described as a miniature Dartmouth, and is a small seaport with a picturesque harbour at the mouth of the Fowey. This little place is 280 miles from London. In the old days it shared with Plymouth and Dartmouth the maritime supremacy of the south of England, and Looe, Truro, and Penryn were merely regarded as creeks belonging to its harbour. The jurisdiction of Fowey, however, was cnfined by an Act [of parliament] passed in 1677 to the twelve miles of coast extending from Noland Head to the Deadman Point. The small inlets, or coves, which radiate, as it were, from its secure and commodious harbour, are locally termed “Pills.” As a western outlet, Fowey has the advantage of every other port in Cornwall. The entrance, which lies nine miles to the north-west, and a quarter of a mile north from the Deadman Rocks, may be readily known at sea by the ruins of St. Saviour’s Church on the east side, and an old windmill, erected before the year 1296, which is seen on the west side. The base of the windmill, by the way, is 243ft. above the sea-level at high water. On the east side, at Polruan Point, is a castle, or block-house, of the time of Edward IV.; while on the western side, above the ruins of an ancient castle, at St. Katherine’s Point, is St. David’s Battery of four guns. Farther in shore are two other small batteries, besides Fowey block-house, in which are mounted six guns. The harbour is a broad sheet of water, sheltered by lofty cliffs; it narrows as it runs inland, but continues navigable as far as Lostwithiel, eight miles from Fowey.” (p. 67)

The photograph shows four sailing ships with sails visible, and a number of smaller boats, as well as the house and buildings of Fowey.

Nearby Lostwithiel is best known for Restormel Castle.

From a Photo by Frith & Co.