South by East: Notes of Travel in Southern Europe (page 2/3)


This engraving was published in 1877; since then, the cathedral was damaged in an earthquake in 1919 and mostly rebuilt, only to be bombed in the Second World War and again partly rebuilt. [more...] [$]


The title page uses at least three typefaces in a range of sizes, and includes an emblem for Marcus Ward, the publishers. [more...] [$] 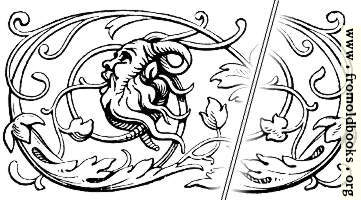 
A decorative woodcut used above a chapter title at the start of the book. The image is a “foliate border” because it contains vines and leaves, but there are also two bird heads and two heads (in profile), bearded and horned, sprouting vines from their mouths. This bearded man in foliage is called a “green man” but, when horned, is said [...] [more...] [$]


A decorative woodcut used at the start of the chapter on Milan; there are dragons, or possibly gryphons but with tails like serpents, and in the centre a face with hair done in pigtails; the whole is [...]sarcophagus. [more...] [$]


This decorative initial letter “M” was used sa a drop cap at the start of the chapter; it is in the shape of a Roman standard that might have been carried by a legion of soldiers, and contains [...] [more...] [$] 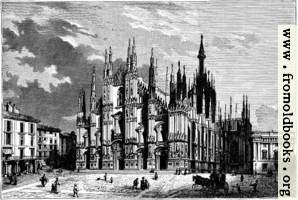 
A very fine engraving of the exceptionally beautiful Milan Cathedral; the scaled-down versions don’t do it justice. [$]


A decorative initial capial letter “F” used as a drop cap atthe start of a chapter. It features a Greek urn, a Minotoar or Bull mask, vine leaves, and, at the top, a naked woman riding a creature that has the front of a [...] [more...] [$]


“The centre of life in Venice is the Piazza of S. Mark, which is not altogether unlike the Palais Royal in Paris. It is surrounded on three sides by lofty houses, the lowest parts of which are shops or cafés, while on its east side stands the Cathedral of S. Mark, in front of which the three lofty masts which once bore the [...] [more...] [$] 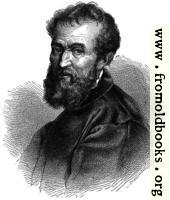 
“Memorials of Michael Angelo meet one at every turn in Florence. His city is justly proud of him. Mrs. Oliphant speaks of him as “the greatest Florentine master, he who stands alone among the crowd, exceeding all as his gigantic statues tower over all other works, alone at once in greatness and in [...] [more...] [$]


It is a funeral procession: the mourners walk in line down the steps and into the columbarium where the ashes of the dead will be placed. The chamber is lit by torches carried by mourners and also by narrow shafts of sunlight from above. In the walls are niches for the ashes. The bereaved kneels ready to receive the ashes; on the righ, two musicians [...] [more...] [$]