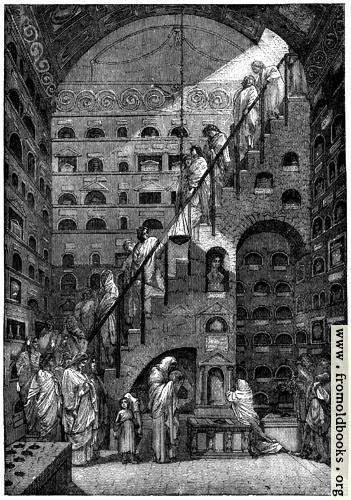 The Columbarium., in Rome, Italy more

It is a funeral procession: the mourners walk in line down the steps and into the columbarium where the ashes of the dead will be placed. The chamber is lit by torches carried by mourners and also by narrow shafts of sunlight from above. In the walls are niches for the ashes. The bereaved kneels ready to receive the ashes; on the righ, two musicians (possibly slaves, since they are barefoot and shirtless) play a dirge on double-stemmed horns.

The Palatine Hill is covered with ruins of the Palaces of the Caesars, which are of comparatively little interest, but the views of Rome which can be obtained from different sides of the hill are interesting. Following the Appian Way from the southwest corner of the Palatine, we soon come to a small street which leads to the Baths of Caracalla. This must once have been a very sumptuous building; it had space for sixteen hundred bathers, and was adorned with frescoes, mosaics, and statues. In the immediate neighbourhood are the tombs of the Scipios, and in an adjacent garden three well-preserved Columbaria. These are deep square subterranean vaults, the sides of which are perforated with pigeonholes (hence the name Columbarium), in which small cinerary urns, often of clay, sometimes of marble, were placed. These vaults were sometimes possessed by two or three separate families, who deposited the ashes of their dead in different parts of the structure, inscribing the name of the deceased on a tablet above the pigeon-hole. Ordinary burial and cremation were for a long period practised at the same time in Rome. In this quarter of the city remains of ancient Rome meet one at every turn, and they are described in detail in scores of books; the remains of the ancient walls, the house of Tiberius Claudius Nero, the porticoes of Septimius’Severus, the portico of Octavius, the Temples of Vesta and of Fortuna Virilis, and the Cloaca Maxima, are a few of the principal. Of the great Temple of Jupiter Stator, the foundation of which was ascribed to Romulus, very scanty remains exist, insufficient indeed to enable the antiquary to assert that they really belonged to the old temple. (p. 76)