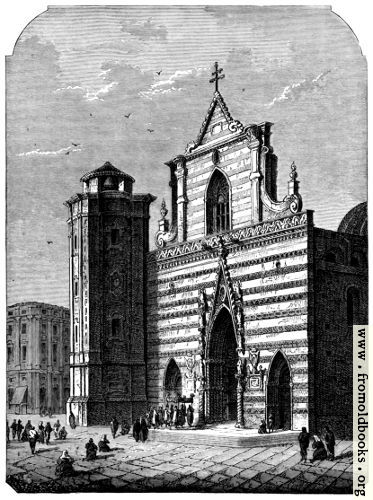 This engraving was published in 1877; since then, the cathedral was damaged in an earthquake in 1919 and mostly rebuilt, only to be bombed in the Second World War and again partly rebuilt.

In spite of the numerous earthquakes which have destroyed Messina, a portion of the athedral dates from the fourteenth century. It has suffered twice from fire, and was almost entirely overthrown in 1783, but the façade remains to testify to the beauty of the original building. Within the Cathedral there are a few mosaics of the fourteenth century, a monument t oArchbishopGiudobaldo by Gregorio da Siena, and a high altar which is said to have cost more than £150,000. The latter is inlaid with rare polished marbles and lapis lazuli, and would be suitable for such a church as S. Paolo fuori le Mura, near Rome. It contains the letter which the Virgin Mary is said to have writen i nthe year 42, and to have sent to the inhabintants of the city by the hands of S. Paul. (p. 164)