South by East: Notes of Travel in Southern Europe (page 3/3)


A decorative panel above the opening of Chapter VI. A man and a woman—more properly a merman and mermaid—meet in the centre. And don’t tell me the man isn’t gay with that wrist, darlings! [more...] [$] 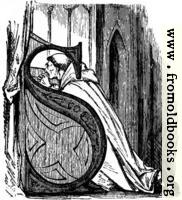 
A decorative capital “S” used as a drop cap, or initial letter S, from the start of Chapter VI, showing a monk kneeling at prayer, with tonsure, robe and sandals. The desk at which [...] [more...] [$] 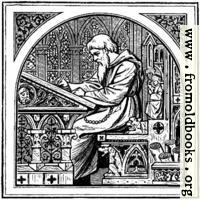 
A small illustration to enliven the space at the end of Chapter VI. A bearded man sits writing at a mediæval writing desk; there are scrolls in the foreground, and a gargoyle’d trifoliate carving on his bench along with a small statue in the [...] [more...] [$]

The Catacombs of Naples


The Catacombs of Naples are of great interest even after those of Rome; they are said to extend for several miles underground; and they consist of broad arched passages hollowed out of the rock, containing on either side niches which once contained the bodies of the dead. They were without doubt [says Rodwell] excavated by the early Christians; many [...] original fresco has been covered with a coating of plaster, and a second fresco has been painted over the first, occasionally even a third. (p. 141) [more...] [$]


The Hippocampus has the upper body and head of a horse combined with the tail of a fish. They come from Phœnecian mythology and were known in the ancient world by peopls as far apart as the Romans, the Greeks, the Picts of Scotland, and the [...] [more...] [$] 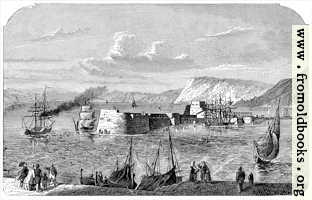 Entrance to the harbour of Messina.


The harbour of Messina, today a large and modern city, was in the 1870s protected by a fort (still present). Today there is a large stone column with a statue on top of it very prominently placed on the nearest building. In the picture there is a steamship (combining steam and sail) and other ships and boats, as well as people along the nearer shore, [...] [more...] [$]


This ornate capital letter W has a long vertical tail or stem of trellis-work beneath the letter, which is an “inhabited initial” with two women inside it. One of the women, who are drawn as dark shaded silhouettes and face each other, is holding a large shallow bowl. The other woman pours a jug or ewer of liquid into the bowl. it is possible that [...] [more...] [$] 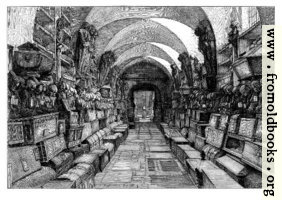 The Catacombs at Palermo


At the end of a long dark corridor, lined with coffins, chests, skulls, and the standing dead, we see an archway, and, through the arch, an old man, a monk, standing in a pool of light. This is a very cinematic engraving, even though it predates [...] [more...] [$]