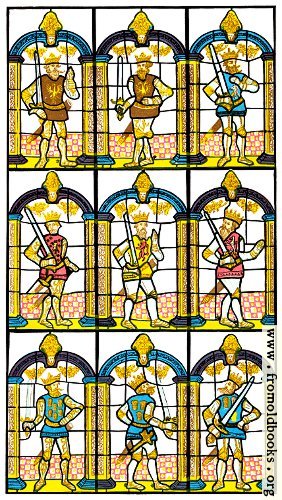 A reproduction in colour of a sixteenth-century painted glass window showing various earls and barons of Chester.

Brereton Hall, in Cheshire, was built in the reign of Elizabeth, by Sir William Brereton; and it is said that the queen herself laid the foundation-stone. The founder appears to have liberally used the beautiful art of staining glass in the decoration of his mansion. In many of the windows were the various bearings of the principal Cheshire families, some of which still remain. But the greatest object of curiosity in this mansion, an object, indeed, of historical interest, was the painted window, of which we have given a faithful copy in the illuminated engraving. This window, we know not for what cause, was some years ago removed to Aston Hall, in Warwickshire. It has had the advantage of being described and engraved in Ormond’s ‘History of Cheshire;’ and a most beautiful and elaborate series of coloured fac-similes, the size of the originals, was executed by Mr. William Fowler, and published in 1808. From these our engraving is copied. Two of the figures represent Leofwine and Leofric, Saxon earls of Mercia. The other figures exhibit the seven Norman earls of Chester. The first earl, Hugh, surnamed Lupus, came into England with the Conqueror, who gave to him and his heirs the county of Chester, to hold as freely by him with the sword as he (William) held by the crown. He died in 1103. Richard, the son of Hugh, was the second earl. He was drowned in returning from Normandy in 1120. Dying without issue, he was succeeded by his cousin, Randolph de Meschines, the third earl, who died in 1129. The fourth earl, Randolph, surnamed de Gernonijs, took part with the Empress Maud and her son Henry, and he, with Robert Earl of Gloucester, made King Stephen prisoner at Lincoln in 1141. He died by poison in 1158. Hugh, surnamed Cyveliok, from the place in Wales where he was born, was the fifth earl: he died in 1180. Randolph, surnamed Blundeville, was the sixth earl. He was a brave, and what was more unsual for a baron, a learned man, having compiled a treatise on the Laws of the Realm. He lived in great honour and esteem in the reigns of Henry II., Richard I., John, and Henry III. He fought in the Holy Land with Cœur-de-Lion, and was the founder of the abbey of Delacroix, in Staffordshire, and of the Grey Friars at Coventry. He died in 1233, having held the earldom fifty-three years. Although married three times, he had no issue; but was succeeded by his nephew John, sumamed Le Scot. Upon his death without issue, in the twenty-second of Henry III., 1238, the King “thought it not good to make a division of the earldom of Chester, it enjoying such a regal prerogative; therefore taking the same into his own hands, ho gave unto the sisters of John Scot other lands, and gave the county palatine of Chester to his eldest son.” (Ormerod.) John le Scot was therefore the last independent Earl of Chester. From that time the eldest sons of the sovereigns of England have been Earls of Chester from the day of their birth.

In the painted window it will be observed that each figure is placed withm an arch. Each arch in the onginal window is seventeen inches in height, and about eight in width between the columns. The arches are struck from two centres, and have a keystone on which is represented a grotesque head under a basket of fruit. It will of course suggest itself to the reader that this window, being in all probability executed in tho time of Elizabeth, cannot be received as a perfectly faithful representation even of the costume of these redoubted vice-kings of the county palatine. Upon this point Ormerod has the following remarks: “The style of the architecture is of the era of Elizabeth, but an erroneous idea prevails as to the high antiquity of these figures, and as to their having been the identical representations of the earls which formerly graced the windows of Chester Abbey.” To correct this idea the county historian refers to a rude drawing in the Harleian MS. 2151, which shows the character of that ancient glass. But he adds, “It is, however, not unlikely that the figures may have been copied from paintings, stained glass, or monkish illuminations, of considerable antiquity; though the paintings themselves were most probably executed for the decoration of the newly-erected Hall of Brereton at the close of the sixteenth century.” (p. iii)