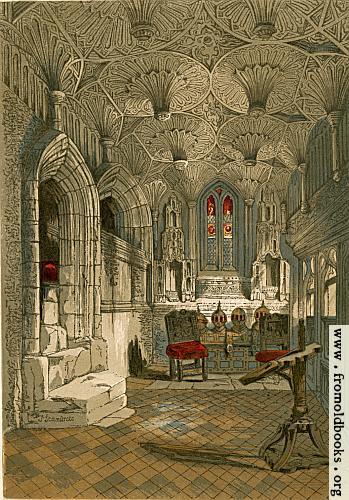 This beautiful engraving, printed in colour using multiple plates, shows the stone ceiling, a tiled floor, an arched entrance-way, a stained-glass window, a church-warden’s chest, a seat and a reading-desk or lectern.

It is a rare consolation for the lover of his country’s monuments, to turn from castles made into prisons, and abbeys into stables, to such a glorious relic of ‘Old England’ as Warwick Castle. Who can forget the first sight of that beautiful pile, little touched by time, not vulgarized by ignorance? (Fig. 417). As he enters the portal through which Gaveston was led to execution, and the king-maker marched in and out to uphold a Yorkist or a Lancastrian pretender to the crown, he feels that he is treading upon ground almost hallowed by its associations (Fig. 415). Cæsar’s Tower—that is but a name! Guy’s Tower—that belongs to poetry, and is therefore a reality! (Fig. 416). Old Dugdale treated Guy and his legend as a true thing: "Of his particular adventures, lest what I say should be suspected for fabulous, I will only instance that combat betwixt him and the Danish champion, Colebrand, whom some (to magnify our noble Guy the more) report to have been a giant. The story whereof, however it may be thought fictitious by some, forasmuch as there be those that make a question whether there was ever really such a man, or, if so, whether all be not a dream which is reported of him, in regard that the monks have sounded out his praises so hyperbolically; yet those that are more considerate will neither doubt the one nor the other, inasmuch as it hath been so usual with our ancient historians, for the encouragement of after-ages unto bold attempts, to set forth the exploits of worthy men with the highest encomiums imaginable: and therefore, should we for that cause be so conceited as to explode it, all history of those times might as well be vilified." We shall have to return to the fair castle of Warwick: so we leave it, at present, under the influence of Guy and his legends (Fig. 418).