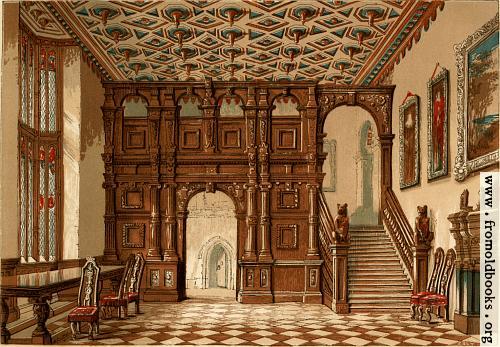 Methley Hall, or Methley Park, in the West Riding of Yorkshire, seven miles south-east from Leeds, is the seat of the Saviles, Earls Mexborough, which family have held the manor for several centuries. The original manor-house was built by Sir Robert Waterton, in the reign of Henry IV.; but after the manor became the property of the Saviles, the old house was pulled down, and the present magnificent mansion erected on its site by Sir John Savile, Baron of the Exchequer, with additions by his son Sir Henry Saville, in a handsome and uniform style. Of this building only the hall and the back part of the house remain: the far-famed gallery with its armorial bearings in painted glass no longer exists; it has given place to the present front part of the mansion, which is of no great magnificence without [i.e. outside], but contains some very fine apartments, one of which, with its beautiful painted ceiling and pendent ornaments, its antique [as of 1845] furniture, rich carving, and lofty mullioned windows, is exhibited in out coloured engraving.” (p. v)