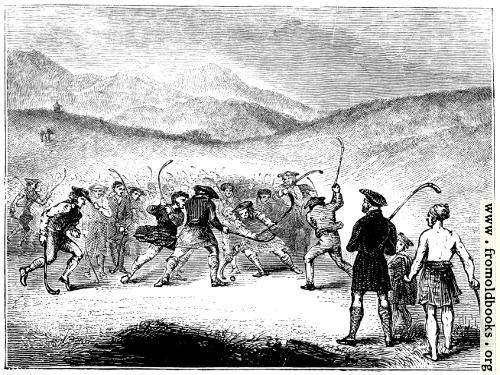 In shinty (Fig. 2403), which is so favourite a sport in the Highlands of Scotland, the ball is struck by a stick, and the object with each party is to drive it beyond certain opposed boundaries. This game is essentially the same as that formerly known as hurling in England. Golf was also once popular in this country. Nay, the very best golf-player upon record is said to be no other than King James II.; surely the last man one would expect to see engaging, much less excelling, in this or any other genial sport. Yet, as we have before had occasion to observe, he was an excellent player at Mall, one of the first skaters in point of time in this country, whilst as to his golf-playing, Kohl says he had but one rival, an Edinburgh shoemaker of the name of Paterson. When the traveller just named was in Scotland he met with a most enthusiastic golfer, who explained the sport and all its adjuncts to him in the most amusing manner. We learn from this that the leather of the ball must be first of all soaked in boiling water, and the interior stuffed with feathers by means of an ingenious little machine. Then it must be painted several coats thick with white-lead to distinguish it from the green and other colours of the field, and to give it the requisite hardness. The head or knob of the club or kolbe must have the right bend, and be neither too heavy nor too light—must be at once strong and elastic, and be filled with lead, and strengthened by a plate of iron on the side that strikes the ball. The wood of the handle must be very carefully chosen, and where the hand grasps it, bound with silk, in order to ensure a better hold. But to do all this requires skill and experience: or, as the describer observed to Kohl—“Gracious powers! to make the thing properly is the immense difficulty!“ (p. 327)

Here various players, some wearing coats and hats, one barefoot and shirtless, engage in what looks rather like a cross between field hockey and warfare.