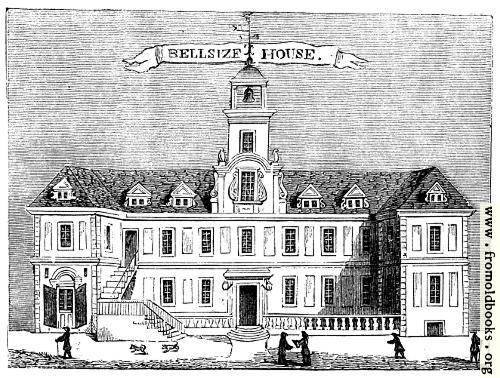 Belsize House was demolished about the time of this book, or perhaps a few year afterwards. There is still a mulberry tree growing from the gardens (2011).

The most noted places of entertainment during the eighteenth century (after Ranelagh and Vauxhall, already noticed) appear to have been Bellsize House, in the Hampstead Road (Fig. 2404), the Floating Coffee-House on the Thames (Fig. 2399), the Folly House, Blackwall (Fig. 2398), and the White Conduit House (Fig. 2402). We need only describe the first. Bellsize consisted of an ancient and stately manor-house, with a large park and handsome gardens, and commanding, as those who may now be familiar with the spot well know, a charming prospect. In 1720 the opening advertisement explained to the public the nature of the enter- tainment proposed to be given there, “the park, wilderness, and gardens” in the meantime having been “wonderfully improved, and filled with variety of birds which compose a most melodious and delightsome harmony. Every morning at seven o’clock the music begins to play, and continues the whole day through; and any person inclined to walk and divert themselves in the morning, may as cheaply breakfast there, on tea or coffee, as in their own chambers.” Coaches were to ply between Hampstead and Bellsize to fetch visitors at sixpence each; and lastly, there is an announcement, which, however calculated to encourage hesitating visitors then to come to the place, would have a very different effect now. Imagine the proprietors of Vauxhall, for instance, putting at the bottom of their bills—“For the security of the guests there are twelve stout fellows completely armed, to patrol betwixt London and Vauxhall, to prevent the insults of highwaymen and footpads which may infest the roads.” Yet such, with the mere alteration of the word Vauxhall for Bellsize, was the conclusion of the first advertisement issued from this place of entertainment.

There was something fresh, pleasant, and poetical about the idea of these early morning recreations; and, whether on that account or other less innocent causes, Bellsize became so fashionable that on one occasion the Prince and Princess of Wales dined there. But rapidly the place degenerated. The twelve armed men swelled up to thirty – the breakfasts, and huntings, and fishings became less attractive than the deep play and the illicit love intrigues that were carried on under cover of the dance or the concert, or the quiet walk in the extensive and secluded and secluded grounds.

There was one class of the community parents who must have had a horror and dread of Bellsize, and all such places, on account of the fatal facility that existed for every sharper or adventurer, whether male or female, to inveigle some young, wealthy and credulous partner into a Fleet marriage. What that was is worth showing. No feature of London in the last century was more noticeable, few more important for evil. A person could not then pass frequently along Fleet Street or Ludgate Hill without having such occasional interrogatories put to him as—“Would you like to be married, sir?” If he looked in a window in the same neighbourhood it was most probable he saw a card, or a large board, with the announcement, “Weddings performed here!” Even the newspapers spread far and wide the tempting invitation in the shape of advertisements, one of which is here transcribed verbatim:—

“Marriages, with a licence, certificate, and a crown stamp, at a guinea, at the new chapel, next door to the china-shop near Fleet Bridge, London, by a regular-bred clergyman, and not by a Fleet parson, as is insinuated in the public papers; and that the town may be freed [from] mistakes, no clergyman, being a prisoner in the Rules of the Fleet, dare marry; and to obviate all doubts, this chapel is not in the verge of the Fleet, but kept by a gentleman who was on board one of His Majesty’s men-of war and likewise has gloriously distinguished himself in defence of his king and country, and is above committing those little mean actions that some men impose on people, being determined to have everything conducted with the utmost decency and regularity, such as shall all be supported in law and equity.“