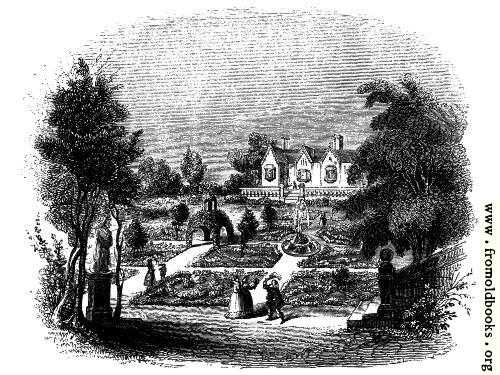 Let us now follow [William Shakespeare] into his retirement (about 1604) at the place so associated with all his early hopes and struggles, and joys and sorrows—Stratford—the place that was evidently, from first to last, tenderly endeared to him. Here, or in its neighbourhood, he, and his wife, and his children were born; and here had one of the last died. Here too he had closed the eyes of a beloved father and mother; where else should his children perform the like office for him? So he purchased, as early as 1597, a house in Stratford; the best one, it its said, in the town. Sir Hugh Clopton had been its builder in the reign of Henry VII., and in his will it was described as the “great house.” It was also, as Dugdale informs us, a “fair house, built of brick and timber.” It was called New Place, and here no doubt the poet had his knotted garden (Fig. 1801), and luxuriated in that most useful as well as delightful of all recreations to the student—horticulture. “His garden was a spacious one. The Avon washed its banks; and within its enclo- sures it had sunny terraces and green lawns, its pleached alleys and honeysuckle bowers (Fig. 1610). If the poet walked forth, a few steps brought him into the country. (p. 135)

The woodcut (more properly wood engraving, I expect) was signed, but the initials are not now easily discernible; they could have been S. S. N, although S. Jackson seems more likely.