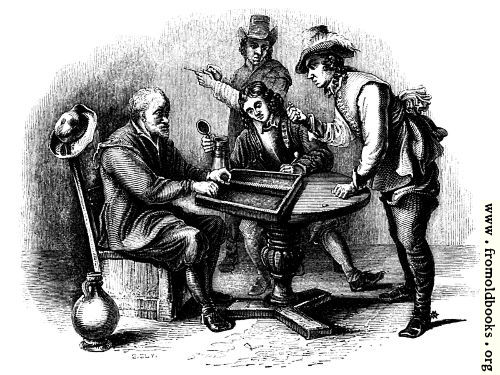 Four men are playing at dice, a game called tric-trac. A discarded clay pipe on the floor, together with a wine-jug and an open tankard, hint at moral excesses. The men wear seventeenth-century costumes; one has a feather in his hat. The engraving is by S. Sly: probably the wood-engraving company of Stephen Sly, who also did a lot of work for the Illustrated London News. It is made after a painting by David Teniers, “the Younger” in 1647. A Game of Tric-Trac. In the original painting the men are in a guardroom and there are plate mail and a spear in the foreground.

The memorable victory of Flodden Field speaks trumpet-tongued of the might of the English bow as late as the reign of Henry VIII. But the days were now at hand when its fame was to exist but in bygone records, when as a national weapon it was to cease entirely from the land. This change took place about the close of the reign of Elizabeth, previous to which the cross-bow (Fig. 1792), so long prohibited by statutes and penalties, had for some time almost superseded the use of the regular bow, except occasionally in the chase, or when the other was used for exercise and amusement. And even that use soon ceased. Stow, in 1598, exclaims, “What should I speak of the ancient daily exercises in the long-bow by citizens of the city, now almost clearly left off and forsaken? I overpass it. For, by the means of closing in of common grounds, our archers, for want of room to shoot abroad, creep into bowling-alleys, and ordinary dicing-houses, near home.” Only four years before this was written, in 1594, there existed in Finsbury Fields alone, no less than one hundred and sixty-four archers’ targets, set up on pillars, crowned with some fanciful device. (p. 127)