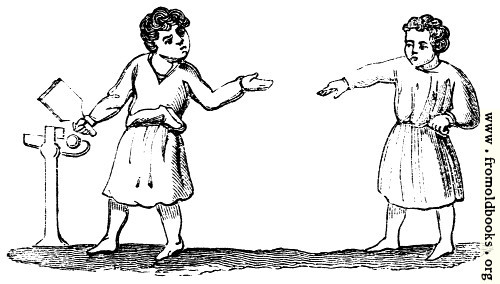 This game may be similar to Ball-and-Trap or Knurr and Spell, two traditional English ball-games that are still played. If so, the ball is on a see-saw an the play will hit the other end of it to make the ball fly into the air; when the ball ascends the player will strike the ball with the bat, trying to hit a particular target or to get the ball to go as far as possible. Or maybe, in this illustration, just to hit the other player!

[After the end of the Wars of the Roses, in the fifteenth century] the green sward that had been trampled by unaccustomed feet is re-levelled for the bowls (Fig. 1378); the ball again flies across the green from the hand, the trap (Fig. 1381), or the vlub (Fig. 1388); and if the boys leap through their hoops (Fig. 1387), as before—to them war itself has been but a new subject for sport—their parents look on with a fresh feeling of satisfaction. (p, 384)