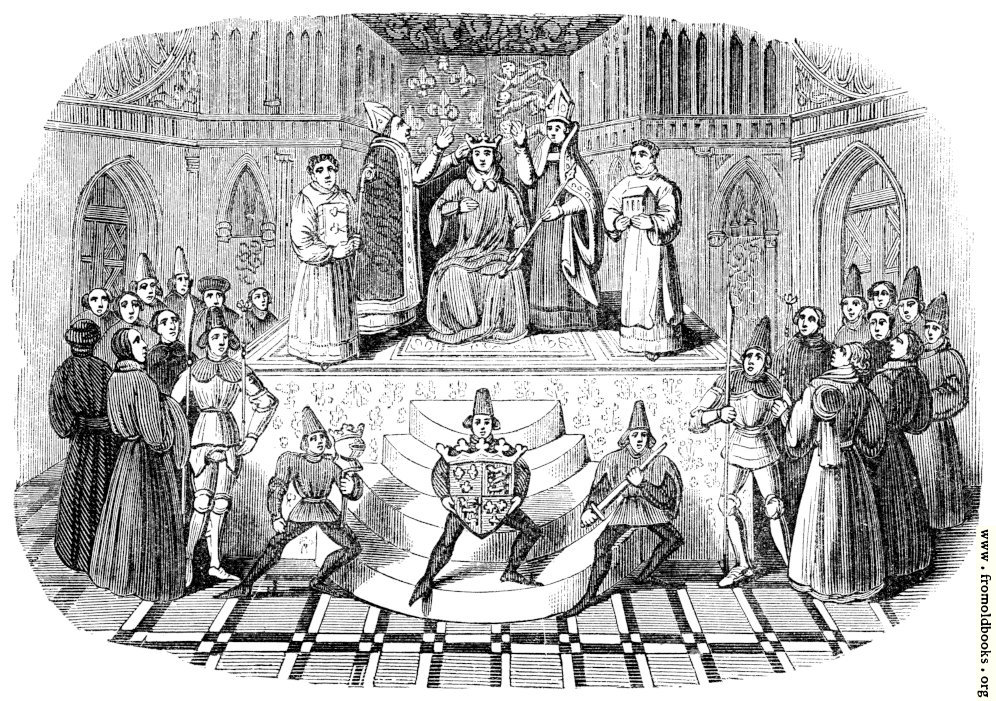 The image is taken, I think, from Harly MS. 4380, folio 186, verso; this is the second volums of Froissart’s Chromicles Vol IV part 2 (1470), and was drawn some three hundred years after the event.

The interest attending the lives of English monarchs generally commences with the act of coronation (Figs. 1150, 1151). In the case of Henry IV. it may be rather said to have ended there. No doubt, that of the three insurrections that disturbed his reign, there was one destined to be long remembered but the household names connected with that event are those of the great leader, Owen Glendower (Fig. 1162) himself, of his coadjutor, Hotspur, and their youthful conqueror, Henry of Monmouth, not of Henry of Bolingbroke, however deeply the latter was concerned in the issue. Yet was this, as far as King Henry IV. was personally concerned, the most important event of his reign. The future poet-king of Scotland, then a boy, was taken on the seas, and kept in a long captivity: some trifling movements were made in connection with the still-asserted claim of sovereignty over France, and laws were passed declaring that relapsed Lollards, or Lollards who refused to abjure heir faith, should be burned; and that was in effect the sum of Henry IV.’s reign. A dreary contrast to the brilliant anticipations caused by his early career: it seemed as though all the genius and energies witli which nature had blessed him had been lavislied upon the one grand act of his life—the obtaining the English throne—and which, when obtained, he could thus make little or no worthy use of. It appears, indeed, tolerably evident, that remorse preyed upon his mind for his conduct towards Richard, as well it might, if, as has been supposed, he had any hand in, or previous cognizance of, the murder. From being one of the most popular of kings, he became one of the most universally disliked. His friends changed to enemies. His own son became in his lifetime the cynosure of all eyes and hearts: the mightiest man in England was one of the most desolate; Henry could not but perceive that his subjects were weary of him, and looked forward with eager hopes to the day that should see their darling Harry of Monmouth on the throne. To crown all, he suffered from bodily ailments and mental superstitions, and both enhanced in a thousand ways all his other anxieties. He fancied that Heaven would not permit his descendants to enjoy the crown, and at last meditated a pilgrimage to the Holy Land, in order to soothe his conscience, and probably believing too that he should be thus fulfilling the divine behests, as conveyed to him through the prophecy, which had said he sliould die in Jerusalem. One day whilst he was praying before the shrine of the confessor in Westminster Abbey, he was seized with an apoplectic fit. The attendants carried him to the abbot’s apartments, and there laid him down in the chamber which still exists, apparently unaltered against the corner of the western front. He inquired the name of the place,—“the Jerusalem Chamber,” was the answer. Here Henry IV. died. He was buried at Canterbury, where a sumptuous table-monument (Fig. 1156) bears the efligies of himself and his second wife, Joan of Navarre. Portraits of both, with the great seal, will be found among our illustrations (Figs. 1153, 1155). (p. 335)