1156.—Tomb of Henry IV and his Queendetails 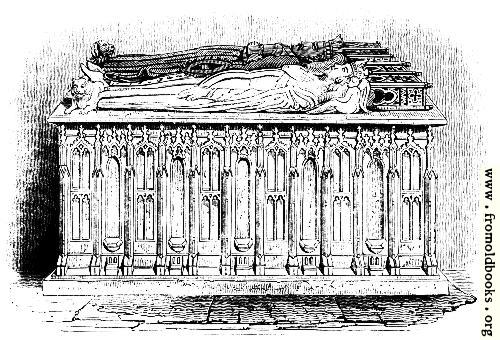 1156.—Tomb of Henry IV and his Queen, in Westminster, London, England more

One day whilst he was praying before the shrine of [Edward] the confessor in Westminster Ammey, he was seized with an apoplectic fit. The attendants carried him to the abbot’s apartments, and there laid him down in the chamber which still exists, apparently unaltered against the corner of the western front. He inquired the name of the place,—“the Jerusalem Chamber,” was the answer. Here Henry IV. died. He was buried at Canterbury, where a sumptuous table-monument (Fig. 1156) bears the effegies of himself and his seconf wife, Joan of Naverre. Portraits of both, with the great seal, will be found among our illustrations (Figs. 1153, 1155). (p. 335)