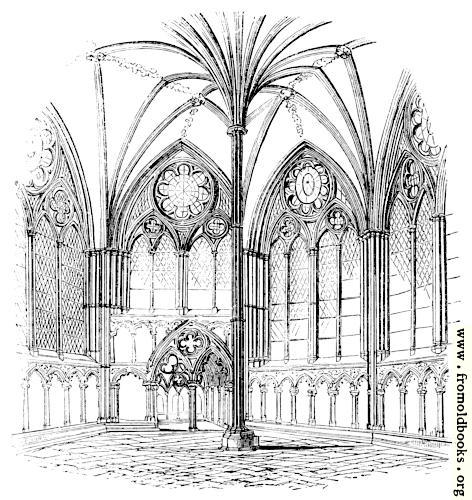 The chapter-house (Fig. 931) is an interesting building. Internally it is very beautiful and highly enriched; there are some finely-carved capitals and some scidpture above the arches; over the capitals is a series of seven curious bracket-heads, one of them appearing (o be a representation of the Trinity; beneath the arches there were formerly circular paintings; it is lighted by eight windows of remarkably beautiful form, and once filled with stained glass; the floor is formed of glazed tiles, and no doubt the whole was originally highly embellislied. A plinth and stone seat is carried round the interior wall, and this is elevated at one end of the room a step higher than elsewhere, and divided into seven compartments, which were originally intended for the bishop and his dignitaries: whilst the other niches, of which there are thirty, were intended for the canons; and one seat on each side the door was for the chancellor and treasurer. (p. 259)