524.—Plan of the Priory of St. Bartholomew.details 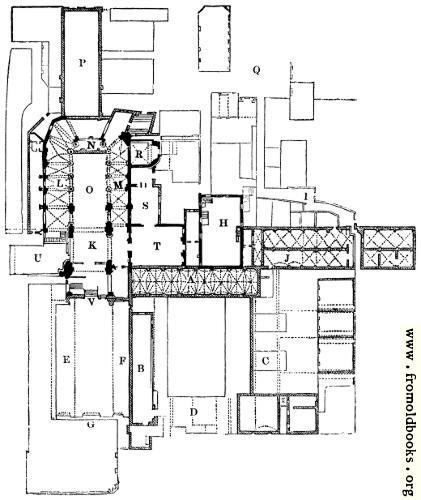 524.—Plan of the Priory of St. Bartholomew., in Smithfield,London,England more

This twelfth-century priory (founded in 1123) was largely ruined, but the church was restored starting in the 1860s; this plan of the area was published in 1840 and predates any restoration work.

Of the other parts of the Priory, there remain the entrance gateway (Fig. 529), portions of the cloisters, and of the connected domestic buildings; above all, the Refectory, or grand hall, still stands to a great extent entire, though so metamorphosed that its very existence has hardly been known to more than a few. It is now occupied by a tobacco manufactory, and divided into stories; but there can be no doubt that any one who shall attentively examine the place will come to the same conclusion as ourselves, that the whole has formed one grand apartment, extending from the ground to the present roof, and that the latter has been originally of open wood-work. It may help to give some general idea of the magnificent scale of the Priory, to state that this hall must have measured forty feet high, thirty broad, and one hundred and twenty in length. Another illustration of the same point is furnished by the plan, which shows the pile in its original state (Fig. 524).* If we look at the part marked O, the present parish Church, and the old Choir, and see how small a proportion it bears to the entire structure, we have a striking view of the former splendour and present degradation of St. Bartholomew’s. The site of the other buildings there marked are now occupied by the most incongruous assemblage of filthy stables and yards, low public-houses, mouldering tenements, with here and there residences of a better character; and in few or none of these can we enter without meeting with corners of immense walls projecting suddenly out, vaulted roofs, boarded-up pillars, and similar evidences of the ruin upon which all these appurtenances of the modern inhabitants have been established. The only other feature that it is necessary to mention is the Crypt, which extends below the Refectory, and is one of the most remarkable places of the kind, even in London, so rich in crypts (Fig. 525). (p. 139)

More in the transcription of this section.