229.—Residence of a Saxon Nobleman.details 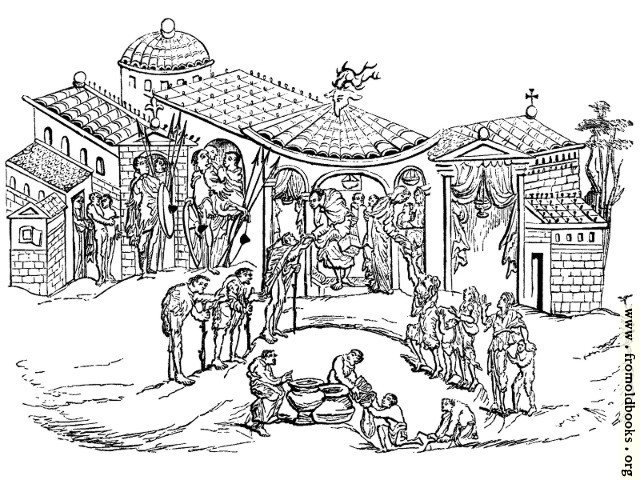 229.—Residence of a Saxon Nobleman., in England more

229.—Residence of a Saxon Nobleman.

There’s a lot going on in this Anglo-Saxon nobleman’s house. The nobleman seems to have an open book upside-down on his lap and is handing something, possibly bread, to one of the beggars at his door, beggars who are cripppled, lame, barefoot, and in some cases wearing only underpants. I think one of them on the right might actually be a monkey. In the foreground a barefoot person, perhaps a monk, is seated at a large urn, and someone else, kneeling, appears to be receiving something in a sack; behind him, someone else is pushing s small dog towards the cooking-pot.

There are also warriors with shields and spears, and the lady of the house on the right isnattring away with her gran while more beggars clamour for food. On the far left perhaps a library, or a chamber with an open window, and at far right a chapel denoted by a cross, even though over the tiled roof sits a deer skull, symbol of hunting or of older religions.