227.—Saxon Emblems of the Month of January.details 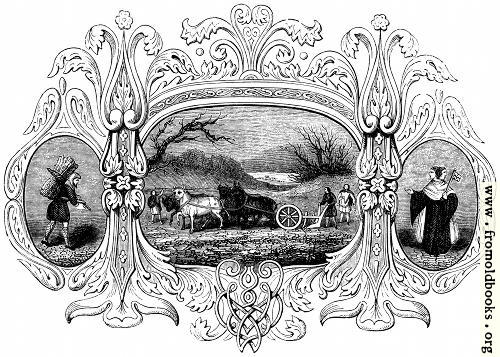 227.—Saxon Emblems of the Month of January. more

227.—Saxon Emblems of the Month of January.

The central portion of the engraving (Fig. 227) represents the ploughman at his labour. Four oxen are employed in the team, and they are guided by a man in front, who bears a long staff. The sower follows immediately behind the ploughman. Fig. 238, which is a literal copy from another manuscript, presents, at once, the operations of ploughing, sowing, mowing, measuring corn into sacks, and the harvest supper. Fig. 256 is a rude representation, from the Bayeux tapestry, of the wheel-plough. Fig. 257, from the same authority, shows us the sower following the harrow—a more accurate representation than that of the sower following the plough. We thus see that the opening of the year was the time in which the ground was broken up, and the seed committed to the bounty of heaven. We cannot with any propriety assume that the seed was literally sown in the coldest month, although it is possible that the winter began earlier than it now does. December was emphatically called Winter-monat, winter-month. The Anglo-Saxon name of January was equally expressive of its fierce and gloomy attributes; its long nights, when men and cattle were sheltering from the snow-storm and the frost, but the hungry wolf was prowling around the homestead. Verstegan says, “The month which we now call January, they called Wolf-monat, to wit, wolf-month, because people are wont always in that month to be in more danger to be devoured of wolves than in any season else of the year: for that, through the extremity of cold and snow, these ravenous beasts could not find of other beasts sufficient to feed upon.” We must consider, therefore, that the Saxon emblems for January are rather indicative of the opening of the year than of the first month of the year. There are preserved in the Cotton Library some very curious dialogues composed by Alfric of Canterbury, who lived in the latter part of the tenth century, which were for the instruction of the Anglo-Saxon youth in the Latin language, upon the principle of interlinear translation; and in these the ploughman says, “I labour much. I go out at daybreak, urging the oxen to the field, and I yoke them to the plough. It is not yet so stark winter that I dare keep close at home, for fear of my lord.” (Turner’s ‘Anglo-Saxons.’) We thus see that the ploughing is done after the harvest, before the winter sets in. The ploughman continues, “But the oxen being yoked, and the shear and coulter fastened on, I ought to plough every day one entire field or more. I have a boy to threaten the oxen with a goad [the long staff represented in the engraving], who is now hoarse through cold and bawling. I ought also to fill the bins of the oxen with hay, and water them, and carry out their soil.” The daily task of the ploughman indicates an advanced state of husbandry. The land was divided into fields; we know from Saxon grants that they had hedges and ditches. He was as careful, too, to carry upon the land the ordure of the oxen, as if he had studied a modern ‘Muck-Manual.’ He knew the value of such labour, and set about it probably in a more scientific manner than many of those who till the same land nine hundred years after him. Mr. Sharon Turner has given a brief and sensible account of the Anglo-Saxon husbandry, from which the following is an extract:—

“When the Anglo-Saxons invaded England, they came into a country which had been under the Roman power for about four hundred years, and where agriculture, after its more complete subjection by Agricola, had been so much encouraged, that it had become one of the western granaries of the empire. The Britons, therefore, of the fifth century may be considered to have pursued the best system of husbandry then in use, and their lands to have been extensively cultivated with all those exterior circumstances which mark established proprietorship and improvement: as small farms; inclosed fields; regular divisions into meadow, arable, pasture, and wood; fixed boundaries; planted hedges; artificial dykes and ditches; selected spots for vineyards, gardens, and orchards; connecting roads and paths; scattered villages, and larger towns; with appropriated names for every spot and object that marked the limits of each property, or the course of each way. All these appear in the earliest Saxon charters, and before the combating invaders had time or ability to make them, if they had not found them in the island. Into such a country the Anglo-Saxon adventurers came, and by these facilities to rural civilization soon became an agricultural people. The natives, whom they despised, conquered, and enslaved, became their educators and servants in the new arts, which they had to learn, of grazing and tillage; and the previous cultivation practised by the Romanised Britons will best account for the numerous divisions, and accurate and precise descriptions of land which occur in almost all the Saxon charters. No modern conveyance could more accurately distinguish or describe the boundaries of the premises which it conveyed.” (’History of the Anglo-Saxons,’ Vol. III., Appendix, No. 2.)

The side emblems of January (Fig. 227) are from manuscripts which incidentally give appropriate pictures of the seasons. The man bearing fuel and the two-headed Janus belong the one to literal and the other to learned art. It is difficult to understand how we retained the names of the week-days from Saxon paganism, and adopted the classical names of the months. (p. 66)