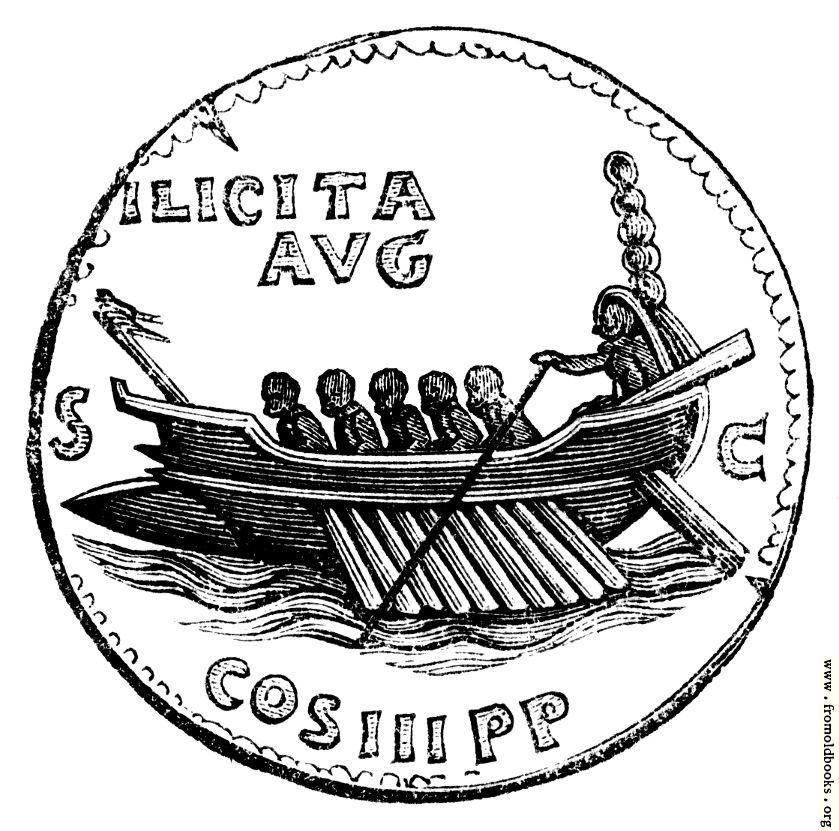 The engraving shows a Roman coin, with a picture of a galley being rowed, whether by slaves or soldiers we cannot tell; the coinbears the words, ilicita avg s c cosiiipp.

The galleys in which the cavalry of Cæsar were approaching the British shores were scattered by a storm. This calamity, and his imperfect acquaintance with the country and with the coast, determined the invader to winter in Gaul. It is a remarkable fact that Cæsar was ignorant of the height to which the tide rises in these narrow seas. A heavy spring-tide came, and his transports, which lay at anchor, were dashed to pieces, and his lighter galleys (Figs. 93, 94, 95) drawn up on the beach, were swamped with the rising waves. This second disaster occurred within a few hours of the conclusion of a peace between the invader and the invaded. That very night, according to Cæsar, it happened to be full moon, when the tides always rise highest,—“a fact at the time wholly unknown to the Romans.” The Britons, with a breach of confidence that may almost be justified in the case of the irruption of a foreign power into a peaceful land, broke the treaty. Cæsar writes that they were signally defeated. But the invader hastily repaired his ships; and set sail, even without his hostages, for the opposite shores, where his power was better established.

Cæsar, early in the next year, returned to a conflict with the people whose coast “looks towards the rising sun.” He came in a fleet of eight hundred vessels; and the natives, either in terror or in policy, left him to land without opposition. The flat shores of Kent again received his legions; and he marched rapidly into the country, till he met a formidable enemy in those whom he had described as “the inland people,” who “for the most part do not sow corn, but live on milk and flesh, and have their clothing of skins.” Cæsar himself bears the most unequivocal testimony to the indomitable courage of this people. (p. 26)