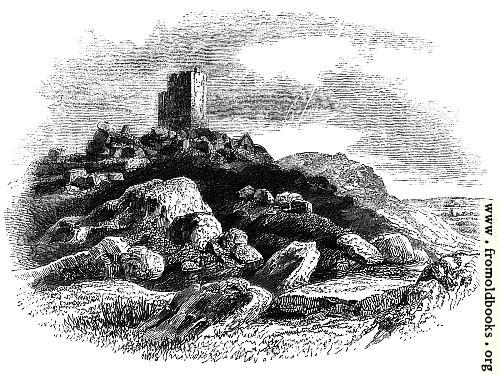 There are two places called Carn Brae in Cornwall; one is the site of a medieval chapel and the other a castle. I think that this is the castle, near Redruth.

But there are many remarkable groups of immense stones, and single stones, in various parts of England, which, however artificial they may appear, are probably wholly or in part natural productions. Some of these objects have involved great differences of opinion. For instance, the Bock of Carnbré, or Karn-bré, near Truro, is held by Borlase, in his ‘Antiquities of Cornwall,’ to be strewed all over with Druidical remains. He says, “In this hill of Karn-bré, we find rock-basins, circles, stones erect, remains of cromlechs, cairns, a grove of oaks, a cave, and an inclosure, not of military, but religious, structure: and these are evidences sufficient of its having been a place of Druid worship; of which it may be some confirmation, that the town, about half a mile across the brook, which runs at the bottom of this hill, was anciently called Red-drew, or, more rightly, Ryd-drew, i. e., the Druids’ Ford, or crossing of the brook.” The little castle at the top of the hill is called by Borlase a British fortress (Fig. 33); and in this point some antiquaries are inclined to agree with him. But they for the most part hold that his notions of circles, and stones erect, and cromlechs, are altogether visionary; and that the remarkable appearances of these rocks are produced by the unassisted operations of nature. It is certain, however, that about a century ago an immense number of gold coins were discovered on this hill, which bear no traces of Roman art; and which, having the forms of something like a horse and a wheel impressed upon them, Borlase thinks allude to the chariot-fighting of the British, being coined before the invasion of Cæsar. Davies, in his ‘Mythology and Rites of the British Druids,’ considers them to be Druidical coins; the supposed horse being a mystical combination of a bird, a mare, and a ship,—“a symbol of Kêd or Ceridwen, the Arkite goddess, or Ceres of the Britons.” It is unnecessary for us to pursue these dark and unsatisfactory inquiries. We mention them to point out how full of doubt and difficulty is the whole subject of the superstitions of our British ancestors.” (p. 11)