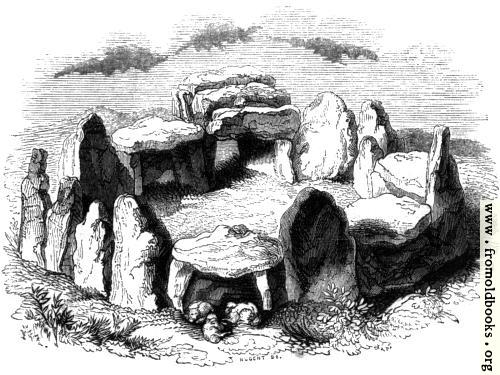 [...] the circle of Darab resembles the Druidical circle of Jersey (Fig. 9), although the circle [in Jersey] is very much smaller, and the stones of very inconsiderable dimentsions,—a copy in miniature of such vast works as those of Stonehenge and Avebury.

This singular monument, which was found buried under the earth, was removed some fifty years ago [in 1785] by General Conway, to his seat near Henley, the stones being placed in his garden according to the original plan.” (p. 6)

The ‘seat near Henley’ is now a school: Park Place School, Remenham, Henley-on-Thames. The school Web site makes mention of the remains of a druidical temple brought there from Jersey. There are photographs on the Prehistoric Jersey Web site.