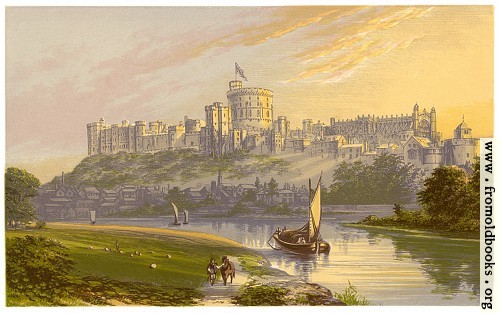 Standing as it does on a gentle eminence in a part of the country which is neither flat nor mountainous, and surrounded as far as the eye can see by beautiful Home scenery of a similar character, the winding Thames completes the beauty of the landscape, and at the same time carries to the ocean the story of the events which unite for ever its own name with those of Britain, thence to be borne by ou ships of native oak to every corner of the globe—a world-wide hisotry, the History of England.

Windsor Castle, originally a fortress of the Roman invaders, and probably of previous existence, was founded by William the Conqueror, and has, as might be supposed, received numberless alterations and additions since. According to some historians, it was newly built by Henry I., where, in 1122, he celebrated his marriage with his second Queen, Adeliza of Louvain. (p. 1)