Holyrood Palace From the Public Gardens Under Calton Hilldetails 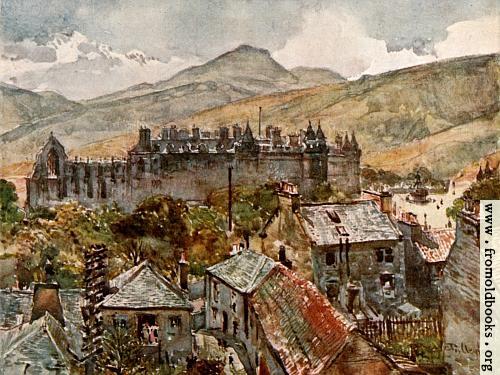 Holyrood Palace stretches across the picture east and west, and is dominated by Arthur’s Seat and Salisbury Crags. The dark turret at the west end of the nearest and north wing contains the private supper-room of Queen Mary, the room from which the Italian Rizzio was taken to his death. The end of the south wing shows beyond, and through a gap in the mean buildings, occupying the foreground of the picture, is seen the open space in front of the Palace, the restored fountain, and the entrance to a carriage road called the Queen’s Drive. The conical roofs of the towers of the Guard House appear to the extreme right. The gable and east window of the Chapel Royal (part of the ancient Abbey), together with the tower, show at the eastern extremity of the north wing.” (p. 29)