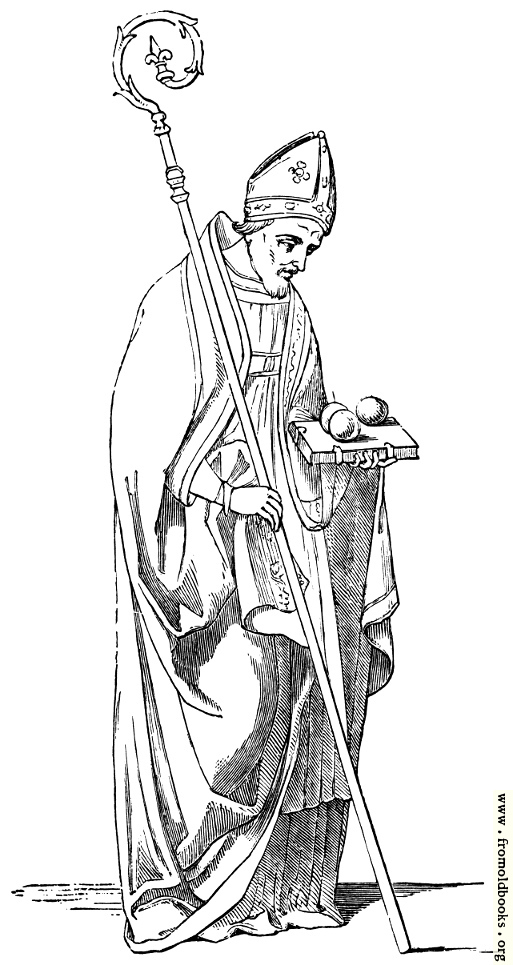 Saint Nicholas is remembered on the 6th of December.

Devotional figures of St. Nicholas exhibit him as standing in the habit of a bishop. In the Greek pictures he is dressed as a Greek bishop, without the mitre, bearing the cross instead of the crosier, and on his cope embroidered the three Persons of the Trinity: [2] but in Western Art his episcopal habit is that of the Western Church; he wears the mitre, the cope, in general gorgeously ornamented, the jewelled gloves, and the crosier. He has sometimes a short gray beard; sometimes he is beardless, in allusion to his youth when elected bishop.

His proper attribute, the three balls, may be variously interpreted; but in general they are understood to signify the three purses of gold, which he threw into the poor man’s window. Some say they represent three loaves of bread, and allude to his feeding the poor during the famine; and others, again, interpret them into a general allusion to the Trinity. The first is, however, the most popular interpretation. These balls are sometimes placed upon his book, as in the illustration; sometimes at his feet; and sometimes in his lap, as in a miniature engraved in Dibdin’s “Decameron,” where he is throned, and gives his benediction as patron. I have also seen them converted into an ornament for his crosier, when they could not conveniently be placed elsewhere, as in a picture by Bartolo Senese. Occasionally, instead of the three balls, there are three purses full of gold, which express more distinctly the allusion to his famous act of charity, as in a statue in his church at Foligno. [1]

Another, and also a very frequent attribute, alludes to the miracle of the three children. They are represented in a tub or a vase, looking up to him with joined hands.

[1] In this instance the three purses are laid on his book. In a picture by Angelico at Perugia, the three purses lie at his feet. I saw an etching from this picture in the possession of the Chevalier Bunsen.

[2] Figures and heads of St. Nicholas are especially frequent in the Greek devotional pictures, as he is the greatest, or, at least, the most popular, saint of the Greek Church.

I think it unnecessary to particularize further the devotional pictures in which St. Nicholas figures alone (or, which is much more frequent, grouped with other saints), because he is in general easily discriminated, —the three balls, on his book or at his feet, being the most frequent attribute, and one which belongs to no other saint. As patron saint of children, a child is sometimes kissing his hand or the hem of his garment. (pp. 457 – 460)