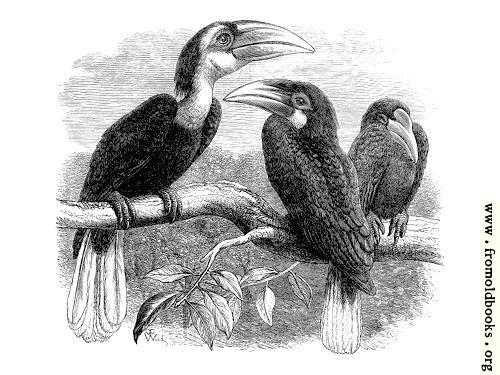 The Hornbills are a family of birds which inhabit the tropics of Asia and Africa, dwelling in the deepest jungles and forests, and feeding principally upon ripe fruits. They are very remarkable for the large size and curious forms of their beaks, which vary much in the different species, and attain huge proportions in some of them. In most of them, also, the feet are very singularly formed, the three toes in front being joined together for some distance from the base, so that it is almost impossible for them to make much progress on the ground, while they are thus especially adapted for an arboreal life. For many years it was supposed to be almost impossible to keep these handsome and attractive birds in a living state in this country [England]. But recently, the proper mode of treatment having been discovered, the Zoologi­cal Society of London has succeeded in intro-­ducing several of the largest and finest species of the group as permanent denizens of the aviaries in Regent’s Park. Amongst those at present in the society’s gardens are particularly noticeable a pair of the large concave-casqued hornbills, which have now been in the collection nearly six years, besides examples of several other ornamental species. To these an important addition has just been made in the shape of three hornbills, of which we now give an Illustration. The large figure in front repre­sents the white-faced male, and the adjoining figure is the black female of the plait-billed hornbill (Buceros Plicatus), while in the back­ground is a figure of a female of the slender hornbill (Buceros Gracilis). These three birds have recently arrived from Sumatra and Malacca, where they were taken as nestlings from the forest-trees in which they were bred last summer. Their bills are consequently not yet fuller [sic] developed, and will attain much larger proportions as the birds grow older. (p. 346)