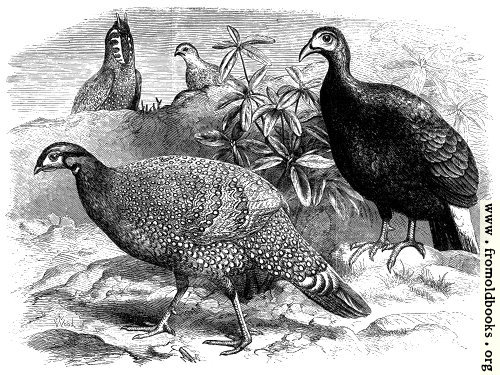 The collection of living pheasants belonging to the Zoological Society of London has just been enriched by the arrival of fine examples of the males of two new species. At the meeting of the society, on Thursday 24th ult. [i.e. March 1870], Mr. Sclater read a paper concerning these remarkable birds, from which we extract the following particulars:

The sides of the head are widely naked and covered with bright bue skin. The top of the head is covered with short, curly feathers, of a bright green; and there is no appearance at all of the remarkable crest whence the genus Lophophorus has derived its nam; though it is just possib;e that this may be developed at a later period, for other indications lead me to believe that our specimen is not quite adult.

The general colour of the plumage is velvety black, glossed with green above, and with a coppery hue on the nape and wings. The lower back and upper tail-coverts are pure white, with some longitudinal black shaft streaks. The tail-feathers are dark chestnut, terminated with white. These latter characters readily distinguish the present bird from the two other known species of Impeyans; and there can be no doubt that it forms a third species of this splendid group of pheasants.

Not less readily distinguishable from its congeners is the tragopan, which Dr. Jerdon has named Ceriornis Blythii or Blyth’s tragopan. Amongst the described species of the genus it most nearly resembles Cabot’s tragopan, being in the lower part of its middle of a nearly uniform colour, somewhat like that species, and not distinctly ocellated, as in the three other members of the genus. It is, however, to be recognised at first sight by the splendid golden-yellow of the naked face and throat.”

Our illustration [this Illustrated London News article is from April 2, 1870] representing these two new and remarkable birds is taken from the specimens lately received by the Zoological Society. The figure on the right represents Sclater’s Impeyan; that on the left is Blyth’s tragopan. Behind, in the background, is given a view of Temminck’s tragopan, in order to show the remarkable way in which these birds display their throat-wattler in the breeding-season. (p. 345)

The engraving is signed by W Wood, or possibly T. W. Wood. The tragopan is better known as the horned pheasant.